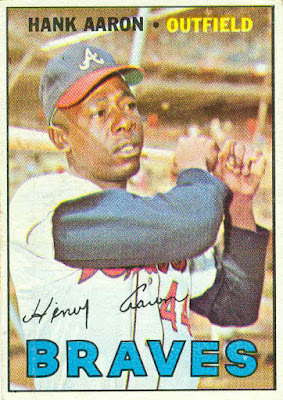 Aaron was overshadowed early in his career by Willie Mays, Mickey Mantle, Roberto Clemente, and others, as he was quietly amassing his home run totals.
As those other stars faded (and Aaron approached the 500 home run mark) he came to the forefront, with only Willie McCovey and Frank Howard reaching similar seasonal home run totals.
Aaron was second to Harmon Killebrew for most home runs hit in the 1960s. See chart here
WSB-TV (Atlanta) obituary
Posted by Jim from Downingtown at 5:49 PM No comments: 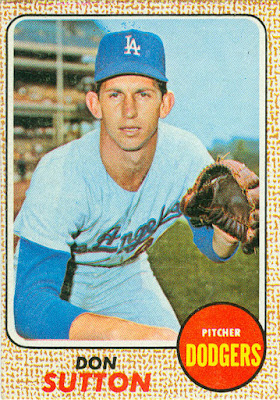 Sutton made his Dodgers' debut in 1966, replacing the departed Johnny Podres in the starting rotation.
He pitched for 23 years, the first 16 with the Dodgers before bouncing around to the Astros, Brewers, Athletics, and Angels for 6 seasons, then winding up his career back with the Dodgers in 1988.
Sutton was a 4-time All-Star, and won 20 games once (21 in 1976).
Although a member of the Hall of Fame, cynics (including this one) wonder how that happened, given that he won 20 games only once, had no Cy Young awards, never led his league in wins or strikeouts, and only led in ERA once. He was also 6-4 in 15 post-season games. (Ok, he has 300+ wins, but he played for 23 seasons, including with good Dodger teams for 16 years. That was bound to happen.)
Posted by Jim from Downingtown at 6:53 AM No comments:

Look at me, channeling George Lucas as I start off with Part 2.  (Part 1 will come later.)
I started collecting sports cards in 1967. Prior to that, I collected non-sports cards (which will be the topic of the "Part 1" post later).
My brother (one year younger than me) and I started collecting baseball cards later than other kids. I can remember seeing kids having baseball cards with them on the school playground as early as 1962. I also started playing youth baseball in 1964, so I don't know why the baseball-card bug didn't bite us until 1967. Maybe because that was the first year we went to a major-league game.
I had two distinct periods of collecting sports cards as a kid. These are shown in yellow in the chart below. (I don't remember why I took a break from Fall 1969 to Summer 1971.)

Although I wasn't buying or actively collecting during that middle period, I did have a handful of '70, '71, and '73 baseball and '69 and '73 football cards. My brother collected baseball cards from 1967-73, and football cards from 1969-73, so he must have given me his doubles.
I don't recall having any problem with the 1972 high numbers, and by the end of that summer I had the entire '72 set except for Bill Russell. However, the 1967 and 1969 7th series cards, and the 1968 6th series cards were not sold in my neighborhood.
Aside from those series, probably 99% of my cards were bought at the same Mom-and-Pop store in my neighborhood.  I mentioned this in a post on my 1967 blog back in 2010. (Actually, my 1967 football cards were bought at another store one block away, which I discovered during an unsuccessful attempt to find '67 baseball high numbers.)
So where did I find my 1968 6th series cards? Back then, I would ride my bicycle all over the neighboring towns, just to "explore". I sketched out where I traveled in a pocket-sized spiral notebook, and after returning home I added my new-found territories to a map I was drawing on a 2'x3' poster board. (I still have it!). I don't remember how long that went on for - probably months, or maybe a year or two.
Anyway, during one outing I found a variety store about 4 towns away from where I lived, and they had 3-panel rack-packs of 1968 baseball cards. I returned to that store many times, until I had completed that series (and the entire 1968 set).
You may notice that I also collected basketball and hockey cards during the 1971-72 season.  That was the only year I bought cards for those sports, and I have a few dozen of each - nowhere near a complete set.
---
After 1972, I stopped collecting for several years, until I was lured back by the free Phillies cards that came with every Philadelphia-area Burger King purchase during the summers of 1979 and 1980. As you may know, these were identical to the regular Topps cards, except for 3 things:
1. There was a Burger King logo on the backs.
2. The cards were numbered from 1 to 20 (or whatever)
3. Some of the players differed between the Topps and Burger King sets. For example, Pete Rose was in the 1979 BK set as a Phillie, but as a Red in the Topps set. In 1980, players no longer on the Phillies (as I recall Tim McCarver, Rawly Eastwick, and Doug Bird) were in the Topps set, but replaced in the BK set by Keith Moreland, Kevin Saucier, and Lonnie Smith.
So I didn't buy any cards in '79 or '80, but after the Burger King teaser sets, and because the Phillies won the 1980 World Series, I dove back in for 1981 - buying my first factory sets (Topps and Fleer). That was also the first year for Donruss sets, but I had to draw the line somewhere. lol
---
That year was one-and-done for me, as I stopped collecting until the early 1990s, when I started buying cards for my sons (and me), as I previously mentioned at the top of this post.
During this collecting period (1990 to 1993), besides completing the Fleer and Donruss sets 5 rack-packs at a time (hah!), I bought Topps factory and update sets from about 1987 to 1993.
---
After '93, I drifted away from the hobby (probably because of the strike), until returning again in 2008. From about 2008 to 2012 I just bought Phillies team sets.
Sometime after starting these blogs in 2009, I stopped buying current cards, and focused on vintage sets. I now have most of the 1966 and 1970 sets, about half of the 1965 set, and a few dozen cards from '63 and '64. As I look at the small Excel chart on the sidebars of my '65 to '70 blogs, I am reminded that I haven't added any baseball cards to my collection since August 2019. Wow, it doesn't seem like that long ago.
What doesn't appear on those charts are the 2 dozen custom 1967 cards (fronts only) that I bought on eBay a few months ago. I was skeptical at first, but they are printed on sturdy white cardboard, although the players are obviously super-imposed on stadium backgrounds. I don't know if I will get any more of them.
---
Stay tuned for Part 1 of this series, where I will regale you with my Batman and Combat cards, among others.
Posted by Jim from Downingtown at 7:01 AM No comments:

Here are the players I featured in 2020:
Not very many, but I'm running out of gas (and cards) 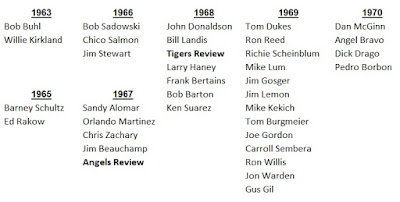 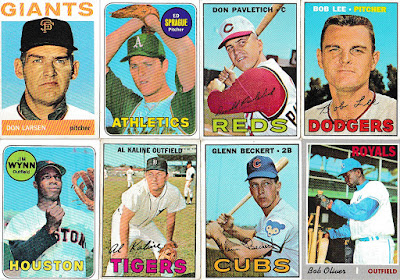 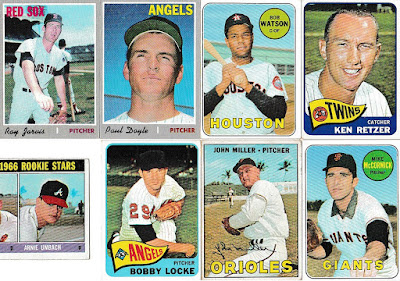 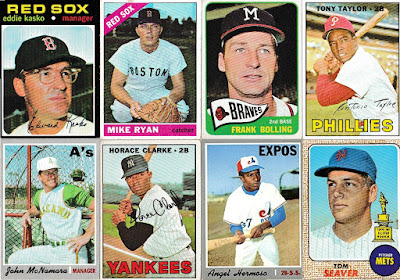 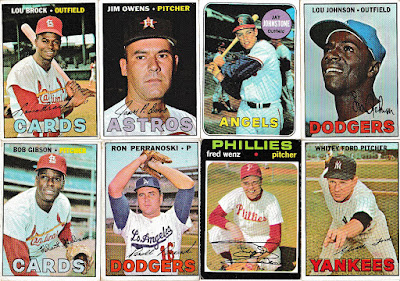 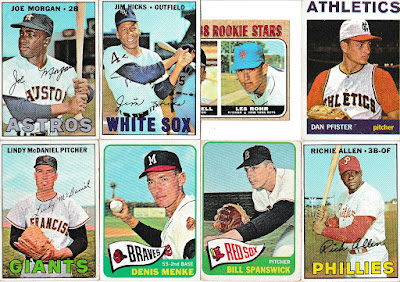 (Seaver, Johnstone, and McDaniel from COVID-19)

And a very long list from outside the baseball world:

Posted by Jim from Downingtown at 9:28 PM 2 comments: