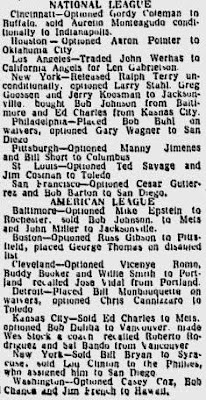 In my earlier review of the Phillies, I also noticed that they seem to have had 26 players on their roster in the early months, before Tito Francona was sold.
Posted by Jim from Downingtown at 9:30 PM

Best as I recall, this was a practice to allow some players to heal, or others to prove themselves. Bad weather, early season injuries and the like could mean a need for an extra player or two, and so the rosters were - I think - 27 for the first month, then there was a cut-down to 25. Then, of course, the roster opened up Sept. 1. Not sure when this ended, but I think it was when baseball briefly tried to go to 23 and 24 man rosters in the '80s.

Ironically, I just read about this in Bobby Murcer's autobiography. He did not give a reason, but he recalled that when he made the Yankees in 1966, it was a 28-man roster that was cut down to 25 on May 1st.