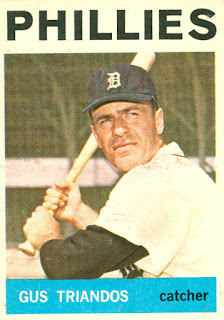 After a year with the Tigers, Gus was traded to the Phillies before the 1964 season, along with pitcher Jim Bunning. He finished up with the Astros in 1965. 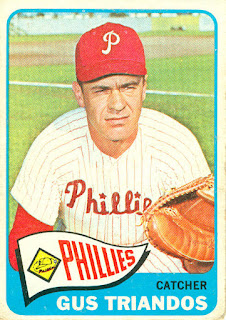 Obituary from the Baltimore Sun

A blog entry about Gus Triandos

That '64 card.... listed on Phillies, show on the Tigers, but as far as I'm concerned he's always an Oriole.

I never had this card but I had it's opposite, Don Demeter in phillies uniform with "Tigers" on top.

I have the Demeter card also. And the 1961 Turk Farrell (with Phillies' cap and Dodgers' nameplate).

Having jumped aboard in 1967 (when Bob Uecker was manning the Phillies' backup catcher slot), my only recollection of Triandos is as a name in the Jim Bunning transaction file.