Tomorrow is the 2012 MLB Hall of Fame induction ceremony.  I will be tuning in to see people pay tribute to Ron Santo (not much of a Barry Larkin fan). Since it's Hall of Fame weekend, I'm dusting off my (semi-annual) 1960s Hall of Fame ballot.

Last time, 15 players and 1 manager were selected by readers of this blog. Candidates receiving less than 15% of the vote last time have been dropped from the ballot (but may appear another time). The remaining players have been joined by a few new names that the selection committee (?) forgot to include last time.

The candidates can be found at the top of this sidebar. Vote for no more than 8 names. The ballot remains open until August 31st, then candidates receiving 75% of the vote will be inducted on September 1st (roster expansion day).

Feel free to comment with your recollections of any of the nominees (or about who you voted for).
Posted by Jim from Downingtown at 11:41 AM 1 comment: 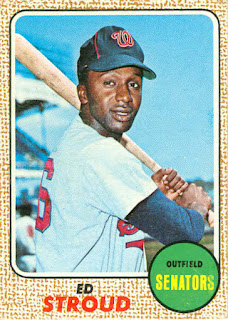 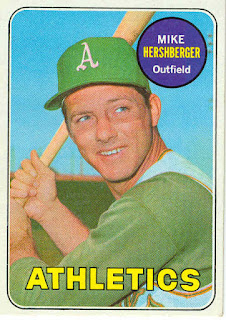 1960s' American League outfielder Mike Hershberger passed away on July 1st, 2012 at age 72, in his hometown of Massillon, Ohio.

Mike was the White Sox' right fielder from 1962-64, then held down the same job for the Kansas City Athletics from 1965-67. Although he remained with the A's following their move to Oakland (pictured above wearing a crisp, new Oakland uniform in the 1969 Topps set), it was in a reduced role.

Traded to the Brewers before the 1970 season, he played one season there before getting his release. He returned to the ChiSox for his final season in 1971.

And for the White Sox fans...

Posted by Jim from Downingtown at 11:34 PM No comments: