Who can't get enough of the Washington Senators? 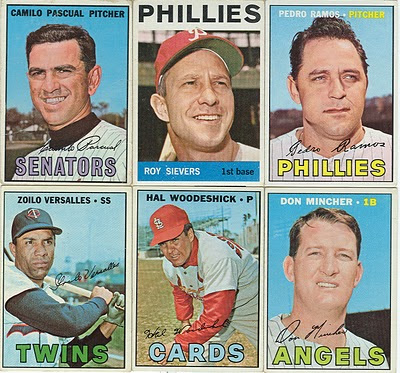 Hal Woodeshick was one of only 2 players who stayed put in Washington while the rest of the team went off to Minnesota. Pedro Ramos, Zoilo Versalles, and Camilo Pascual began their careers in Washington, and returned at the tail end of their careers.
Posted by Jim from Downingtown at 10:31 AM

I am enjoying your musings on Topps cards of the Golden Age. I'm so glad trends have shifted away from the "How much is his rookie card worth?" phase, and left collecting to real collectors - people like us, who love the game.

2010 is my own 40th year actively collecting cards. "Topps Only" is my mantra. I have yet to complete a set prior to 1990, but have undertaken a year-long task to fill all the holes in my 1970 Topps set - the first one I ever started collecting. Wish me luck. (I already have #189 Yankees Rookies w/Munson and #660 Bench, so two of the big guns are already out of the way, as are most of the high numbers.)

My favorite sets are 1957, 1961 and 1967, probably due to the largely unobstructed photographs of the players. (Since 1961 was the year of my birth, I may consider that set for next year's mission...)

Hope you get to toddle over to my blog, called MeesterFonnyBlog. I deal largely with pop culture, but a few ball-card references are there. Hope you enjoy it.