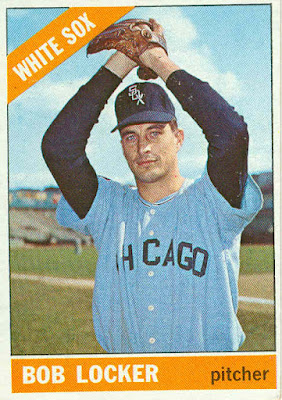 Locker pitched in 576 games, all in relief. His first 4 1/2 seasons were with the White Sox, where he shared the bullpen with knuckleballers Hoyt Wilhelm and Eddie Fisher, among others. In 1967 he led the AL with 77 appearances.
In June 1969 he was dealt to the Seattle Pilots. A year later the Brewers sold him to the Athletics. He pitched for Oakland for the next 2 1/2 seasons, before wrapping up with the Cubs in '73 and '75. (He missed the 1974 season due to injury.)
In 2010 Locker created a website promoting former Players Association head Marvin Miller, in an attempt to get him voted into the Hall of Fame. Miller was inducted in 2020.
Obituary
Posted by Jim from Downingtown at 5:50 PM 1 comment: