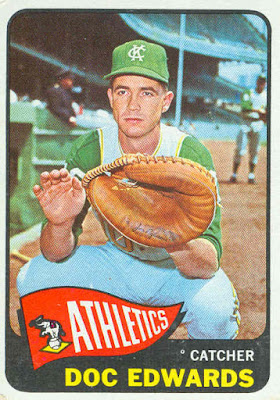 Edwards' career included stops with the Indians, Athletics, and Yankees. Although mostly a backup catcher, Doc was the Athletics' primary starting catcher in 1963 and 1964, even though he played less than half of the games (due to having 4 catchers).

I first became aware of Edwards when he was the bullpen coach for the Phillies from 1970-72. Doc had been catching for the Phillies' AAA teams in '68 and '69, then was named to new manager Frank Lucchesi's staff in 1970.

In one early-season game that year, both Phillies' catchers (Tim McCarver and Mike Ryan) broke their hands in the SAME INNING. The team recalled their 2 AAA backstops the next day, and at some point activated Edwards, who appeared in 35 games, five seasons after his last big-league action.

Washington Post obituary
.
Posted by Jim from Downingtown at 12:11 PM No comments: 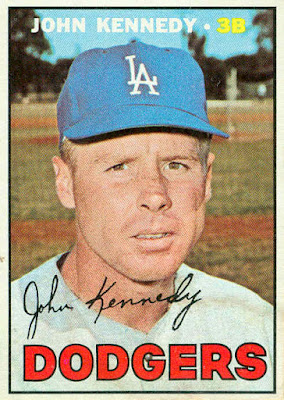 Kennedy broke in with the Washington Senators in September 1962, also playing there for part of 1963. His only year as a full-time regular was 1964 with the Senators.

After that season, he was traded to the Dodgers in the Frank Howard deal. He played 2 years in LA, and 1 season with the Yankees, then spent all of 1968 in the minors.

Kennedy resurfaced in 1969 with the Seattle Pilots, and played part of 1970 with the Brewers. He played his last 4 1/2 seasons with the Red Sox, retiring after the 1974 season.

SABR biography
.
Posted by Jim from Downingtown at 11:56 PM No comments: 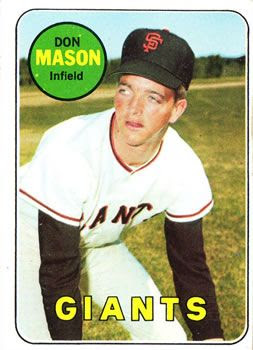 Mason played minor-league ball for the Senators, Giants, and Padres from 1964 to 1974.

Traded to the Padres after the 1970 season, he played a full season with San Diego in 1971, but was up and down for the next 2 seasons.

Cape Cod Times obituary
.
Posted by Jim from Downingtown at 10:00 AM No comments: 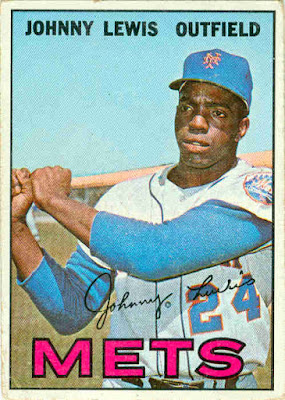 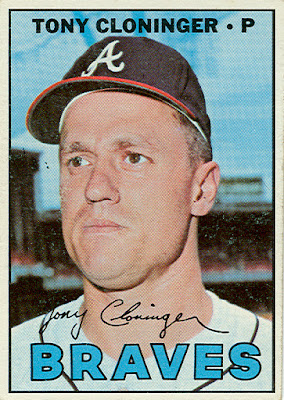 Cloninger was the Braves' ace for the few years between the Warren Spahn and Phil Niekro eras, but may be most remembered for hitting 2 grand slams in the same game on July 3, 1966.

He played for the Braves from 1961-68, then was traded to the Reds in the June 1968 deal that sent Milt Pappas to the Braves. After 3 1/2 seasons with the Reds, Cloninger pitched briefly for the Cardinals in 1972.

After his playing career, Cloninger coached for the Yankees for 9 seasons during the Joe Torre regime, and then worked for the Red Sox for the past 15 years.

WLOS-13 obituary
.
Posted by Jim from Downingtown at 2:08 PM No comments: