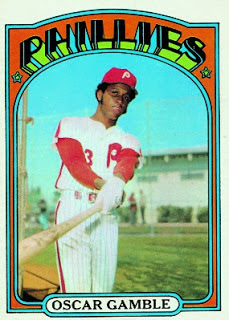 Gamble began his career in the Cubs organization, and was acquired by the Phillies prior to 1970 for Johnny Callison. After 3 seasons as a part-time outfielder with the Phillies, he moved on to Indians, where he was an every-day player from 1973-75.

After quick stops with the Yankees, Padres, White Sox, and Rangers, Gamble returned to the Bronx for his longest stay anywhere (1979-84).

He wrapped up his career in 1985 with the White Sox. Gamble played for 7 teams over his 17-year career.

Chicago Sun-Times obituary
.
Posted by Jim from Downingtown at 12:05 PM

Owner of the all-time 'fro.