Last year Orlando Cepeda was the lone inductee, joining the other 27 members in the Hall. Two players received less than 15% of the vote and were dropped from the ballot, leaving 7 returning candidates this time:

Added to the ballot this time is Tigers' pitcher Denny McLain, returning for a second chance* after missing the cut on the inaugural ballot.

As always, use the sidebar poll to vote for up to half (this time 4) of the players on the ballot. The poll will close on August 31st, and those receiving at least 75% of the votes will be inducted.

In addition to using the poll, I encourage everyone to leave comments about their selections or thought processes, to hopefully spark some discussion about these players. But do not use the comments as a means to vote, because I am only counting the votes in the actual poll widget, since there is no way to know if a vote in the comments is instead of, or in addition to, the poll. 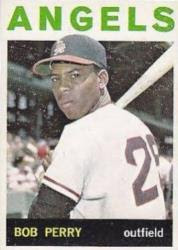 His only major-league action came with the Angels, where he spent most of '63 and '64, starting 99 games over those 2 seasons.

Hometown obituary
.
Posted by Jim from Downingtown at 5:45 PM No comments:


A few months ago, I found the box containing all my Phillies' yearbooks from 1967 to 1980-something. I bought this yearbook on my first trip to a Phillies game, back in May 1967.

Fifty-six pages of Phillies' facts and photos for only ONE DOLLAR! Most major-league players got a full page to themselves, while some of the younger or marginal players shared a page with another player. (No one had more than a single page.)

I'm not going to scan and post every page (at least not all at once!), but I have already posted Jim Bunning's page here, and here are a few more: 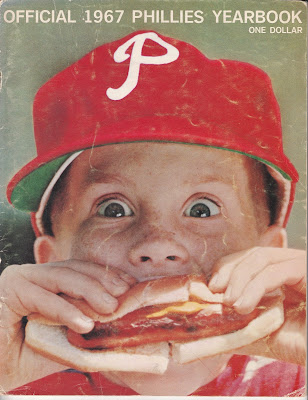 If the yearbook was a dollar, I'm guessing that hot dog was a quarter! 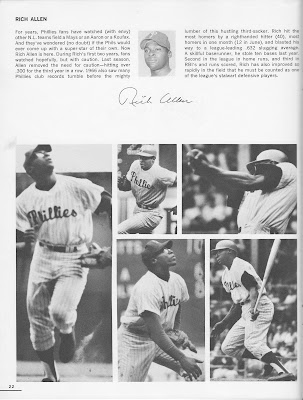 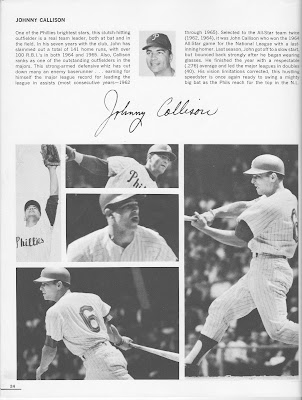 Johnny Callison was a fan favorite, and lived year-round in the Philadelphia suburbs. 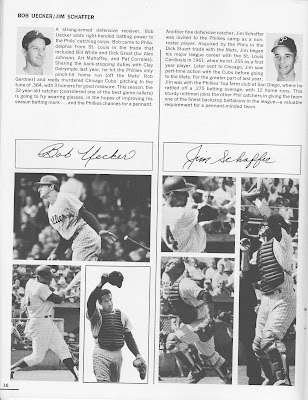 In his lower-right photo, Bob Uecker seems to be thinking "There must be a better way to make a living!" 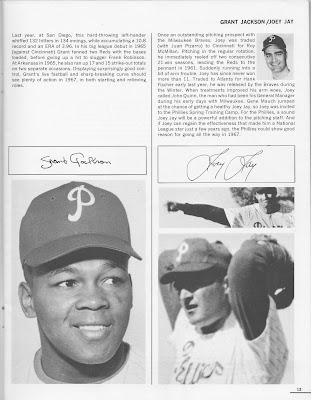 This page is interesting in that it is evidence that veteran Braves' and Reds' starter Joey Jay was given a spring training invite to Phillies' camp in 1967. He didn't make the team, but spent the year pitching for their single-A team before retiring. 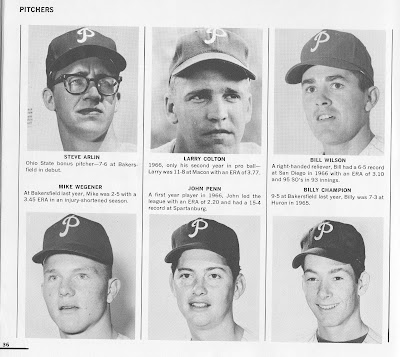 After the player pages and center-spread color team photo, there's a section for minor-league managers, prospects, scouts, etc. Here are the Phillies pitching prospects that season. Both Steve Arlin and Mike Wegener were lost in the expansion draft after the 1968 season. And the position-player prospects. Sutherland, Harmon, Hisle, and Doyle all had long careers in the majors. (Hmm... surprising that Larry Bowa is not here.)  Dick Allen's brother Ron had a cup of coffee with the Mets a few years later. 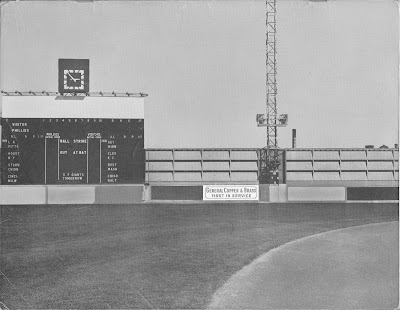 Inside the back cover is a shot of the infamous "spite wall" in the outfield. Connie Mack put that up years earlier to prevent the residents across the street from viewing the games for free.
.
Posted by Jim from Downingtown at 9:48 PM 1 comment:

Here's another installment in an occasional series called "1967 Scrapbook". In 2011 I found a baseball scrapbook I had made in 1967, containing photos that I clipped from the Philadelphia sports pages that summer.

1. He was one of 2 veteran pitchers obtained from the Cubs for a young Ferguson Jenkins ('nuff said).
2. He was selected by the Expos in the post-1968 expansion draft, but retired rather than start over with a new team.


Here are some "Larry Jackson moments" from the 1967 season:

On June 2oth, Jackson shutout the Mets 4-0 on a 1-hitter (Tommy Davis getting a leadoff double in the 2nd inning). 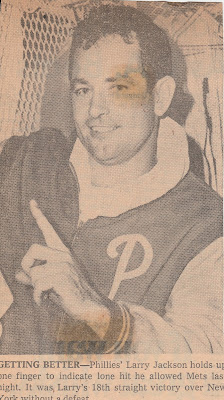 On July 7th, Jackson took a throw to the nose in the 6th inning against the Cardinals, while backing up home plate. 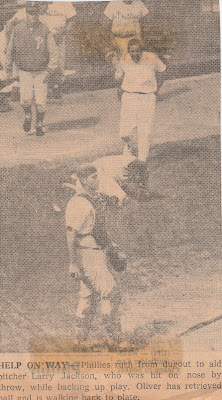 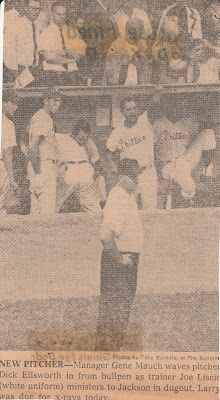 On the back of the 3rd photo above, there is a story about Reds' manager Dave Bristol fining batters for not driving in a man on 3rd with less than 2 outs. Pete Rose was the first one fined. There's a hilarious comment about Rose trying to pay his fine with trading stamps!!! 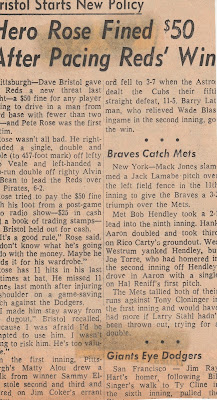 Posted by Jim from Downingtown at 3:31 PM No comments: