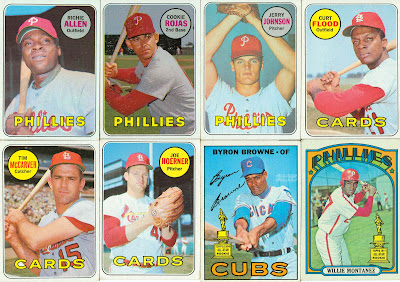 
Click the 'trades' label below to see all the installments in this series.
.
Posted by Jim from Downingtown at 1:47 PM

I don't think I'd call McCarver's time with the Phillies "good". He was injured in 1970 and only played 44 games, leaving the job to guys like Doc Edwards and Mike Compton. He had a solid 1971 for sure, but he had fallen off so badly in 1972 (and apparently had trouble throwing) he was traded for John Bateman.

McCarver was not a plodder! Think John Wathan.

Hmm... I guess the memory of Tim's earlier accomplishments with the Cardinals has blended into my recollections of him as a Phillie. I always wondered why the Phillies traded him straight-up for the pedestrian John Bateman in 1972, in the middle of Steve Carlton's greatest season. (Chemistry? Bah!)

I do recall that McCarver and backup catcher Mike Ryan were both injured in the same game in 1970, causing both to miss significant time (while the team used their 2 AAA catchers and a reactivated bullpen coach in the interim).

Actually, McCarver and Ryan were injured in the SAME INNING.

Eric, after several seasons with Clay Dalrymple and Mike Ryan behind the plate, ANYTHING McCarver could give them was "good".