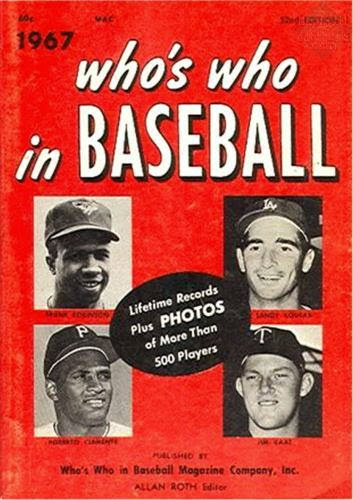 I found this magazine recently at an antique store in Avalon, NJ. I collected several of these back in the 1960s, including (I’m sure) this one. I may still have them stashed in my house somewhere, but for $1.00 I couldn’t pass up this one.

I briefly leafed through the magazine in the store, and although you can find the stats and trades on Baseball-Reference.com, this mag also notes the dates of players’ trips to the disabled list, which is a plus.

I examined each page a few days ago, and discovered that every player (except Athletics’ pitcher Bill Edgerton) has a thumbnail pic next to his stats. (This surprised me, because I recalled that many rookies did not have photos in some years.) For some reason, EVERY photo showed the player in a blacked-out cap.

The mag has the career major and minor league stats for every major-league player active at press time (which seemed to be sometime in December 1966, because the off-season trades of Maury Wills to the Pirates and Mike McCormick to the Giants are noted).


Almost every player that had a card (and about 3 dozen players on "Rookie Stars" cards) in the 1967 Topps set was included in this magazine, but I was also surprised to see the following players without 1967 cards included (maybe they were not released or retired by press time):


On the back cover, and inside the 2 covers are full-page photos of Juan Marichal, Gary Peters, and Matty Alou.  I didn't scan any inside pages, because I don't want to flatten the magazine on my scanner, fearing the pages will detach.

A nice little reference guide for roster geeks from back in the day!

Posted by Jim from Downingtown at 8:00 PM 2 comments:


Frank Torre, former 1st baseman for the Braves and Phillies, and older brother of Joe Torre, passed away on September 13, 2014 of a heart attack at age 82. 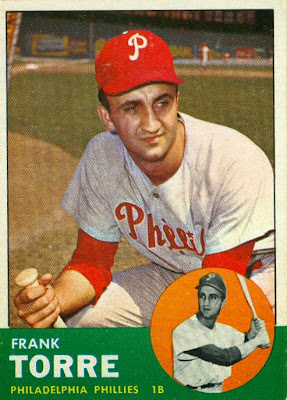 Although Frank and Joe were both in the Braves' organization at the same time, they were never teammates.

Following his baseball career, Torre worked for the Rawlings sporting goods company, and was an executive for the Baseball Assistance Team.

Posted by Jim from Downingtown at 10:56 PM No comments: