With all the recent hoopla about Jim Bunning's perfect game on Fathers' Day 50 years ago, I was reminded of a poster I picked up a few years ago.

I found this tonight, and remembered that I got it at a yard sale. They had a whole stack of them for sale, so I picked up one for me and one for my brother.

This poster is from 1996, when Bunning was inducted into the Hall of Fame. 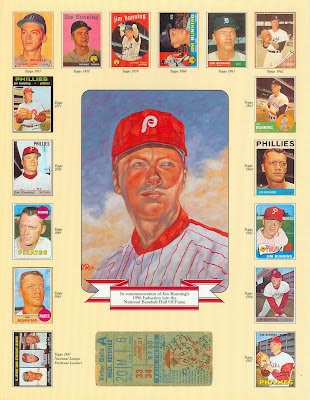 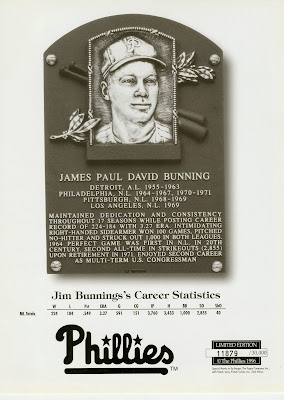 The poster is 8 1/2" x 11", with a very high gloss on the front. Surrounding Bunning's portrait are all his Topps individual baseball cards from 1957 to 1971, plus the NL Strikeout Leaders card from the 1967 set. At the bottom is the ticket from the perfect game against the Mets in June 1964.
.
Posted by Jim from Downingtown at 10:18 PM No comments: 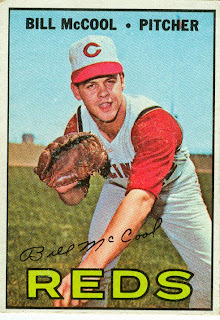 Selected by the San Diego Padres in the October 1968 expansion draft, Bill pitched one season for the Padres, before finishing his major-league career with the Cardinals in 1970. In 1971, he pitched in triple-A ball for the Royals and Twins before retiring.

In 2013 he was inducted into the Indiana Baseball Hall of Fame, where he pitched in high school in 1962.

Posted by Jim from Downingtown at 11:56 PM 2 comments:


Former player, manager, and coach Don Zimmer passed away on June 4th, 2014 at the age of 83. He had been hospitalized since mid-April following heart surgery. 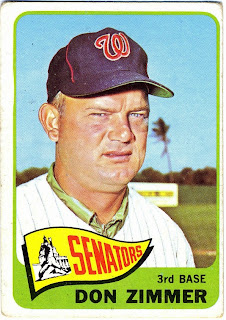 Posted by Jim from Downingtown at 9:37 PM 2 comments: