Last weekend I was out and about to several flea markets and antique stores in my area, and I found this Curt Simmons card. This is a 1955 Red Man Tobacco card, which appears to be cut out of a box, similar to the early-1960s Post and Jell-O cards. The bottom edge is a little rough, which I have cropped in the photo of the card front.

I had no idea these cards even existed, but this vendor had the Simmons card, along with a 1955 Granny Hamner and a 1953 Robin Roberts (both Red Man cards). 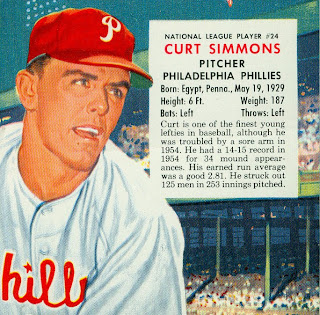 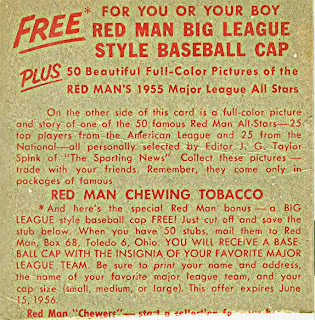 In the same display case were other assorted Topps baseball cards from the 1950s - 1970s. The only one that jumped out at me was a 1973 Roberto Clemente card, issued in the year after his untimely death.

At that point in my day, I only had enough money left for one of these cards, so the vintage Simmons card (from a set that I had no other cards from) won out over the '73 Clemente. Maybe next time, Roberto.

Posted by Jim from Downingtown at 9:30 PM 2 comments: