Congratulations to Lou Brock, on his induction into the 1960s Blog Hall of Fame. He joins the 21 players and 1 manager shown below.

There were 18 votes this time. Former Braves teammates Eddie Mathews and Warren Spahn each missed induction by 1 vote.  Yankees' pitcher Whitey Ford missed induction by 2 votes. Frankly, I'm surprised that these 3 players were not slam-dunks on their first ballot. Still, this is the highest percentage each has received in their 4 times on the ballot. Nobody received less that the minimum 15% to be retained for the next ballot, so they will all be back for another try.


Former major-league shortstop and manager Jim Fregosi passed away February 14, 2014 at age 71, after suffering a massive stroke while on a MLB Alumni Caribbean cruise. He also suffered subsequent strokes while in a Miami hospital.

Fregosi began his major-league career as a shortstop for the expansion Los Angeles Angels in 1961, although he was not on the team from the start of their inaugural season. He was the Angels' starting shortstop from 1962 to 1971, and was a 6-time all-star while an Angel.

After his managerial career, Fregosi scouted for the Braves.

UPDATE:
As of 6pm today, there are a number of tributes to Jim Fregosi, as shown on my 1967 sidebar. This doesn't include a great post by WhiteSoxCards, who had since moved on to another post.

Posted by Jim from Downingtown at 12:29 PM No comments:


I was planning on this next post being another episode in my quest for 1964 Topps Giant baseball cards, as I was returning to the same store where I made 3 previous purchases. Alas, when I started looking through the display case, only Pete Ward (who I already have) was there, so I turned my attention to other 1960s-vintage cards.

I always keep a small want list of 1966 and 1970 cards in my wallet, because I never know when I'll need it. Today it came in handy, as I scored a high-numbered 1966 Senators Rookies card that I needed. I also upgraded my '66 Dave McNally, which I had posted to my 1966 blog a few weeks ago. 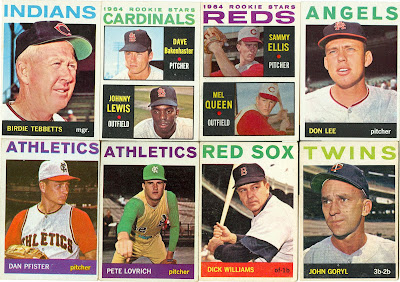 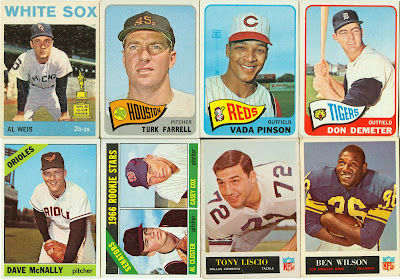 I only wish I had a portable want list for the '64 and '65 cards, because I had no idea who I needed (especially the '64s). I didn't really intend to work on those 2 sets, but these excellent-condition cards were dirt-cheap, so I couldn't pass them up. I just selected a bunch of guys that I never heard of before, plus Dick Williams, Birdie Tebbetts, and the trophy-laden Al Weis, which I knew I didn't have. For the '65s, I was pretty sure I didn't have Farrell, Pinson, and Demeter.

On the football side, there were too many to pick from, so I chose two 1965 Philadelphia Gum Cards: Tony Liscio (Rayfield Wright's predecessor at offensive tackle), and Ben Wilson. I knew of Wilson from watching Super Bowl II highlights on cable. He had a monster day moving the chains for the Packers that day, on their way to a 2nd consecutive SB championship. Almost all of my pre-1967 football cards are Philadelphia Eagles, so this is a new direction for my football card collecting.

This represents the first base-set baseball cards I've purchased since November 2010 (except for the 1970 Seattle Pilots team card, shown in this recent post on the 1969 Pilots). Since then, I've only been getting '64 giant cards, coins, and early-1960s Philadelphia Eagles' cards.

Posted by Jim from Downingtown at 5:47 PM 3 comments: