Last time, Dick Allen was the only player inducted, joining the other 21 members in the Hall. Candidates receiving less than 15% of the vote (Maury Wills, Joe Torre) were dropped from the ballot.


A write-in feature was added last time, but only one of the 16 voters used it, so I am removing it from the ballot.  Instead, 7 players have been added to the ballot this time.

Also added to the ballot for the first time are:
Frank Howard
Dave McNally
Boog Powell


You can vote for up to 8 of the 16 players on the ballot. Candidates selected by 75% of the voters will be inducted.  Those receiving less than 15% will be removed from the next ballot. 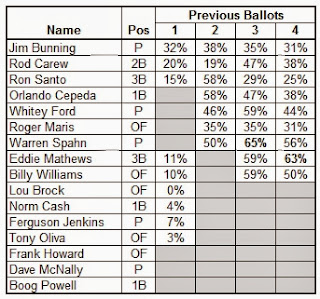 I have brought back some of the players who were dropped after the first ballot, since that ballot had different voting rules than all subsequent ballots.  The first time around, the top vote-getter at each position was inducted, regardless of percentage, and all candidates had to compete with the likes of Sandy Koufax, Willie Mays, Hank Aaron, etc. (Players dropped after ballot #2 and later will probably not return on a future ballot, since their low percentage was achieved under the current voting rules.)

Posted by Jim from Downingtown at 10:32 PM No comments: