National League baseball in Houston began in 1962. After 51 seasons, it ended this year, as the Astros were shuttled to the American League, courtesy of the weasel occupying the commissioner's office: 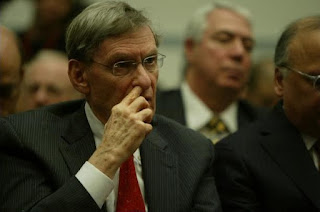 After 29 years in the American League, Selig moved his Brewers to the National League, so that each league would have an even number of teams, thereby avoiding daily inter-league play. He was quoted as saying "The Brewers BELONG in the National League. Milwaukee is a National League city." (I suppose he based that statement on the THIRTEEN seasons the Braves played there.)

Now, after FIFTY-ONE seasons, that logic apparently doesn't apply to the Astros. The Brewers changed leagues to solve the inter-league play problem. Now that that doesn't seem to be a problem any more, the Brewers should shift back.

Posted by Jim from Downingtown at 5:32 PM 2 comments: