On April 21, 1966, the Phillies engineered what they must have thought was a good trade, to bring in two veteran pitchers to help them "get over the hump". ( I could probably end the post here, as the rest needs no further explanation.) :( 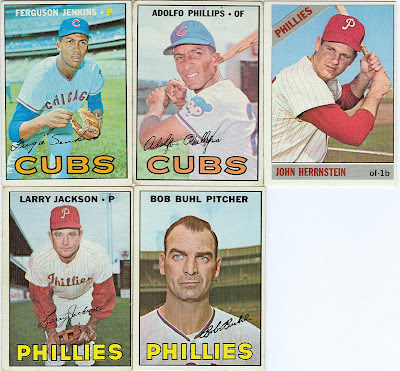 Let's see who the Phillies got:

Larry Jackson was a veteran starting pitcher for the Cardinals and Cubs since 1955. He led the National League with 24 wins in 1964, and finished 2nd in the (combined major-league) Cy Young voting, behind the Angels' Dean Chance, and ahead of Sandy Koufax. Although he was shelled early in 1966 for the Cubs, he bounced back and was a serviceable #3 starter for the Phillies (behind Jim Bunning and Chris Short) for the next 3 seasons. Jackson retired after being selected by the Montreal Expos in the expansion draft following the 1968 season. 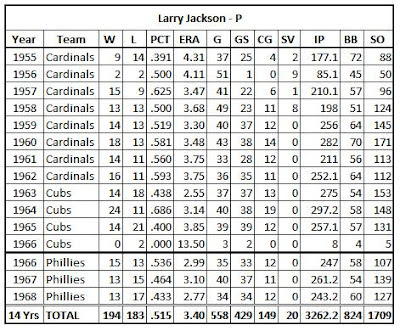 Bob Buhl was also a veteran pitcher, having broken in with the Milwaukee Braves back in 1953. Unlike Jackson, Buhl was washed up by the time the Phillies traded for him. His ERA with the Cubs after 1 game was a bloated 15.43. What were the Phillies thinking? Maybe they envisioned a bounce back by Buhl, similar to what happened in 1962 after his "change of scenery" from Milwaukee to Chicago. Bob's career ended about a year after arriving in Philadelphia. 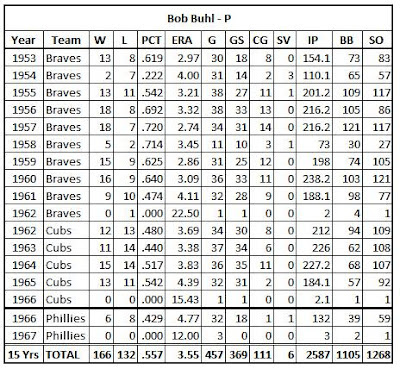 Now who did the Phillies part with to get the two veteran pitchers? Just 3 prospects:

Ferguson Jenkins was "the one that got away". Following his trade to Chicago, he went on to win 20 or more games seven times, led the NL in strikeouts in 1969, won the Cy Young award in 1971, and was a three-time allstar. 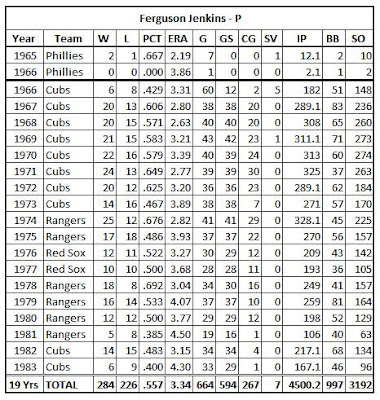 Adolfo Phillips had a serviceable but undistinguished career as a centerfielder for the Cubs and Expos in the late 1960s. Curiously, he led the NL with 29 intentional walks in 1967. I wonder if he was batting 8th? 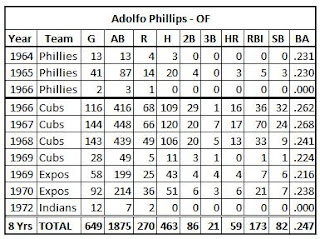 John Herrnstein had a brief major-league career, the highlight was being the Phillies' primary 1st baseman during their almost-pennant-winning 1964 season. After that he was a bit player, and rarely played following his trade to the Cubs (and subsequent trade to the Braves). 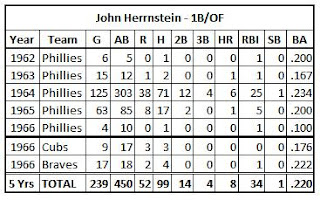 ADVANTAGE: Don't make me say it. This may be the ultimate example of "mortgaging the future". (Oh well, at least the Phillies learned their lesson about trading with the Cubs... or not)

Posted by Jim from Downingtown at 3:30 PM 3 comments: