The results have been tabulated, and the inductees for the first 1960s Blog Hall of Fame are:

The inaugural election includes 16 names. The plan was to elect 1 player at each position, except for 3 outfielders, 4 starting pitchers, 2 relief pitchers, and 2 managers. At first base, Harmon Killebrew jumped out to a commanding lead early on, but Willie McCovey slowly caught up and tied Killebrew in the last few days. Both players will be inducted, and to keep the class at 16 names, manager Red Schoendienst (who finished a distant 2nd to Walter Alston) will not be inducted this time.

Sandy Koufax and Bob Gibson received an amazing 96% and 92% of the votes. Willie Mays and Hank Aaron also received a high number of votes (well ahead of #3 outfielder Roberto Clemente). At other positions, Pete Rose received more than 3 times the votes of runner-up Rod Carew.

I was surprised to see how few votes were received by Carl Yastrzemski, Al Kaline, Fergie Jenkins, and especially Lou Brock.

All names receiving less than 15% of the vote will be dropped from the next ballot (although they may be added to a future ballot). This leaves 15 holdovers for the next ballot, who will be joined by some new players (such as Warren Spahn and Whitey Ford, who were inexplicably left off this first ballot by the nominating committee).

Some of the winners seem to have less-than-impressive voting percentages in the 40% to 60% range, but I think this was a result of each position being on a separate ballot, and voters having to choose between one or another player. Future ballots will have all names in a single list, and multiple names can be selected without regard to their position.
Posted by Jim from Downingtown at 12:33 PM 4 comments:

Another installment of a new series called "1967 Scrapbook". A few months ago, I found a baseball scrapbook I had made in 1967, containing photos that I clipped from the Philadelphia sports pages that summer. Most of the photos are from the previous night's Phillies game.


June 5th - Rojas dons the catching gear in the top of the 9th. With the Phillies behind 10-2 in the bottom of the 8th, manager Gene Mauch pinch-hit for Bob Uecker (who had earlier replaced starting catcher Clay Dalrymple). Mauch sure liked to make moves!

June 30th - Cookie pitched the 9th, adding a 9th position to his resume: 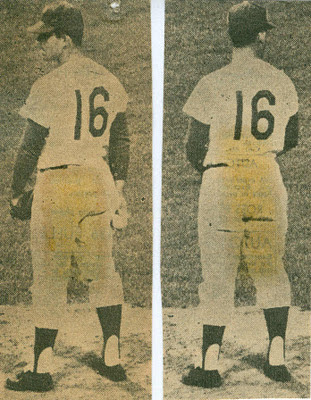 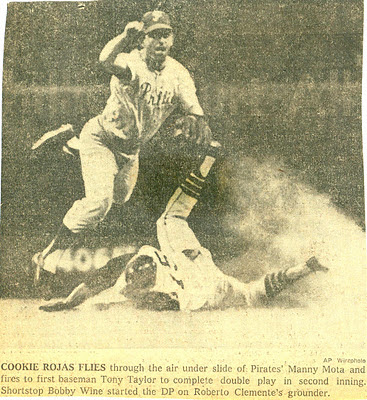 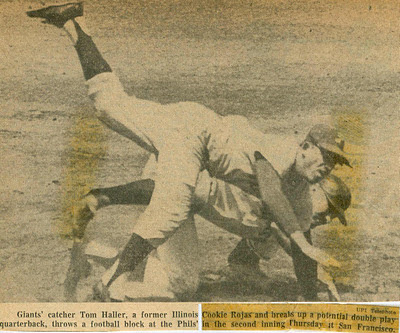 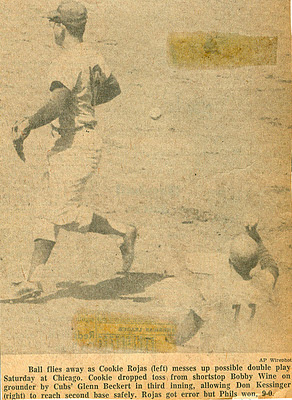