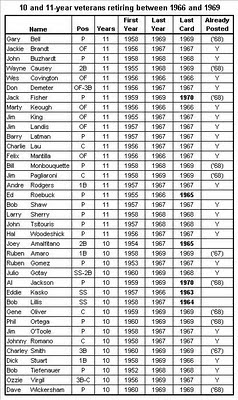 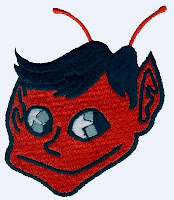 Here are the last active players to have played for the St. Louis Browns. 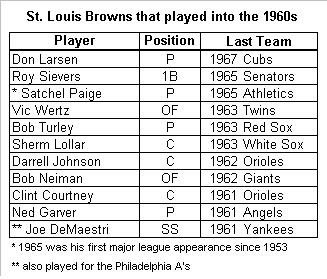 
On Wednesday night, the 1967 season is the subject of a Baseball Seasons episode.
Posted by Jim from Downingtown at 9:03 PM No comments:

Following the abysmal 1968 season, the Phillies embarked on a major housecleaning.

New additions were 1B/3B Deron Johnson, acquired from Atlanta, and top rookies Don Money and Larry Hisle, both of who had flopped a year earlier. This lineup seemed like a mix of rookies and veterans playing out of position. Tony Taylor led the team in at-bats, but didn't play 80 games at any one position. Newly-acquired slugger Deron Johnson also bounced between positions.


Catchers
Weak-hitting right-handed Mike Ryan (#9) assumed the starting catcher's job, for lack of a better alternative. Rookie Dave Watkins was the backup (in his only major-league season).


Infielders
Richie Allen (#15) was the regular first baseman, although for less than 120 games (thanks to his suspension). Cookie Rojas (#16) and Tony Taylor (#8) split the second base duties, with Rojas starting more often. With all three of last year's shortstops departing, the starting job was given to rookie Don Money (#5), who was acquired from the Pirates for Jim Bunning following the 1967 season. Lightweight rookie infielder Terry Harmon backed up at SS and 2B. Tony Taylor played about half the games at third base, with the remaining games split between Deron Johnson (#11) and Rick Joseph (#19).


Outfielders
Johnny Callison (#6) the Phillies rightfielder since the early 60's, was back for one last go-round. Rookie Larry Hisle (#4) blossomed as the regular centerfielder. Newcomer Deron Johnson was the primary leftfielder, with John Briggs (#12) getting the call whenever Johnson would move in to third base. Spring-training rookie phenom Ron Stone soon settled back into the scrub role he would play throughout his Phillies career.


Pitchers
Last year's ace Chris Short (#41) missed the whole season due to injury. Filling his shoes was southpaw Grant Jackson (#29), previously a reliever. Woody Fryman (#35) was the other left-handed starter, while the righties were Rick Wise (#38), Jerry Johnson (#33), and rookie Billy Champion (#31).

The closers were veteran Turk Farrell (#32) and rookie Al Raffo, who came out of nowhere, pitched well, then disappeared after the season. The other bullpen suspects were long-time organizational fodder John Boozer, and rookies Billy Wilson and Lowell Palmer. Palmer was notable for always wearing dark glasses (even on his baseball cards!)


Summary
This team was worse than the '68 team, and as such, 2nd-year manager Bob Skinner got the boot before the season was over.

On the bright side, Don Money proved to be the real deal at shortstop, and Larry Hisle also had a fine rookie season. They both were selected to the major-league all-rookie team. Hisle's success as a Phillie was to be short-lived, as he faded in 1971 and was traded to the Dodgers. Rick Wise and Grant Jackson were also improving as quality starters. This Phillies team had gotten younger since 1968, but not better. Following the 1969 season, they would get even younger as Callison, Allen, Rojas, and Farrell would leave.

1969 was billed as the "last year at Connie Mack Stadium". However, because of construction delays at Veterans Stadium, they would play one more season at the old park.
Posted by Jim from Downingtown at 1:08 AM 1 comment: 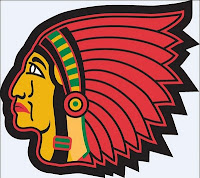 Here are the last active players to have played for the Boston Braves.

Eddie Mathews went out on top - appearing in the 1968 World Series with the Tigers.
.
Posted by Jim from Downingtown at 3:32 PM No comments: