Baltimore Orioles pitchers of the 1960s

Any O's fans out there? Here's a breakdown of their pitching staffs from the first wave of '64 - '66 (McNally, Bunker, Palmer), through the second wave (Phoebus, Hardin, Cuellar, and the return of Palmer), up to the four 20-game winners season of 1971. (click to enlarge) 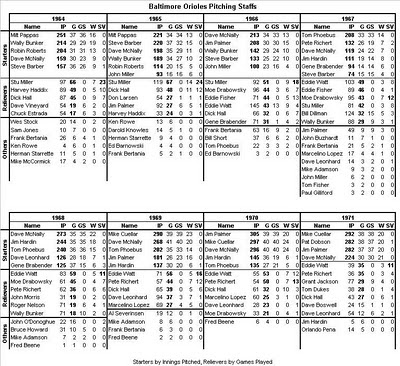 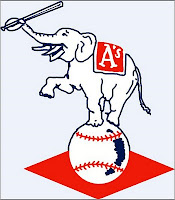 Here are the last active players to have played for the Philadelphia Athletics. 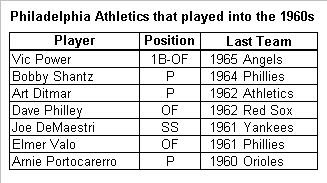 Vic Power is also featured in my 1966 blog today.
.
Posted by Jim from Downingtown at 12:36 AM No comments:

Earlier tonight, I was watching Bob Costas' Studio 42 interview show on the MLB Network. His guest was Dick Allen, who is surprisingly soft-spoken. Mixed in with studio chatter was video of Allen's highlights, as well as comments from Willie Mays, Cookie Rojas, and Stan Hochman (a Philadelphia sportswriter since 1959).

- Allen is friends to this day with Frank Thomas.
- He doesn't blame Gene Mauch for 1964's collapse.
- His off-field antics and in-game scrawling in the dirt were designed to get him shipped out of Philly.
- He was the first black player to play for the minor-league team in Little Rock AR, and took much abuse there.

These shows are usually replayed often [at least the McCarver episode was! :( ] Phillies fans should check it out.
Posted by Jim from Downingtown at 12:09 AM 3 comments:

Here are the last active players to have played for the "old" Washington Senators. That is, the team that left Washington DC after 1960 to become the Minnesota Twins.

They were immediately replaced by the expansion Washington Senators in 1961, who 11 seasons later would also skip town to become the Texas Rangers. 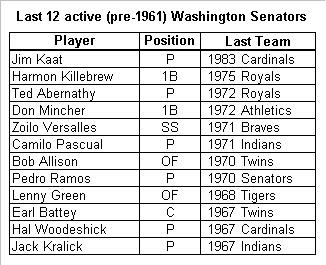 Posted by Jim from Downingtown at 10:02 PM No comments: