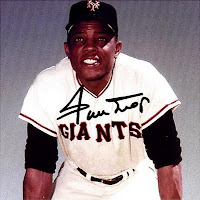 Here are the last active players to have played for the New York Giants. Appropriately, Willie Mays is on top of the list. 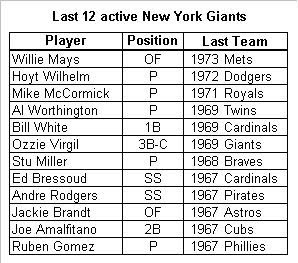 On October 16th, I posted a list of the last active player from each of the first wave of relocated teams.

Today, I'm drilling down to find the last 10 active players to play for the Brooklyn Dodgers. Most had retired by the end of the 1960s. Some guys (like Aspromonte and Demeter) only had a few at-bats with Brooklyn. 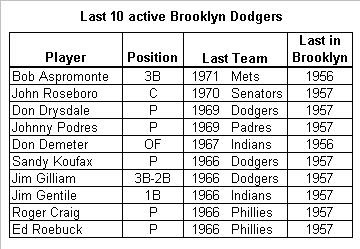 Next: The New York Giants
.
Posted by Jim from Downingtown at 11:53 PM No comments:

Jarry Park was a minor-league stadium

The MLB network was showing a 1970 game between the Expos and Pirates. The lighting was so bad at Jarry Park in Montreal that not only do the players have shadows, but when the camera behind home plate follows fly balls to the outfield, you can't even see the outfield fence, because the entire area is in shadows.
Posted by Jim from Downingtown at 9:44 PM 5 comments:

I just noticed that the MLB Network will be showing various games from the 1965, 1968, and 1969 World Series on Saturday and Sunday. 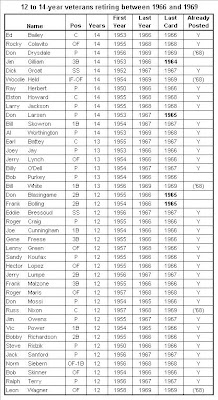 I watched game #1 of the 1968 World Series on the MLB Network today. (I've seen this one earlier this year on MLB, but it's always a classic!)

The announcers were NBC's Curt Gowdy (as always), and Harry Caray (who was the Cardinals' broadcaster at the time). I think it's great that the network included the home team's regular announcer (as they would also do in 1969 with the Mets' announcer). The 2 of them each announced half the game, with the other one doing sparse color commentary.

The early buzz was 16-year veteran Tiger Al Kaline playing in his 1st series, and Detroit outfielder Mickey Stanley starting at shortstop (having only played there for 9 games in his pro career, including all of the Tigers' final 6 games in 1968). The highlight of the game turned out to be Bob Gibson's stellar performance, as he pitched a complete game victory and broke the World Series strikeout record with 17 strikeouts. Denny McLain (who won 31 games that year), pitched well for a few innings, but was outplayed by Gibson.

The Tigers eventually won the series, thanks to the way their manager Mayo Smith handled his pitching rotation. Gibson & McLain started games 1 & 4, with Gibson winning both. Nelson Briles and Mickey Lolich started games 2 & 5, with Lolich winning both for the Tigers. (The Cardinals also won game 3.) After 5 games, with the Cardinals leading 3-2, Smith brought McLain and Lolich back on short rest to pitch games 6 and 7, and the Tigers won both!

After the 1967 season, the Phillies traded pitcher Jim Bunning (their ace since coming over from Detroit prior to the 1964 season) to the Pirates for southpaw Woody Fryman, shortstop prospect Don Money, and 2 other minor-league pitchers. The same day, they packaged disappointing #5 starter Dick Ellsworth (acquired prior to 1967 from the Cubs for pitcher Ray Culp) and backup catcher Gene Oliver in a deal which brought a young catcher from the Red Sox (Mike Ryan). This was not enough however, as the team sank deeper in the standings.

Along the way, Gene Mauch, who had managed the team from day #2 of the 1960 season (Eddie Sawyer had quit after the first game) was fired, as much for his inability to co-exist with Richie Allen as for the losing record. Taking over the team was Bob Skinner, who had managed the Phillies AAA club in San Diego since 1966. He did no better than Mauch, and would be fired midway through the following season.

1st base
Future NL President Bill White (#10) returned for his 3rd (and last) year as the Phil's first baseman.

2nd base
Once again, Cookie Rojas (#16) was the everyday second baseman. As part of the 100th anniversary celebration of Major League Baseball, there was a poll for the all-time Phillies team. Rojas was the second baseman on that team, the only current player to be named. Rojas finally shed his utilityman role, playing only one game away from second base (catcher).

Shortstop
Weak-hitting Bobby Wine (#7) had chronic back problems which kept him out most of the season. Highly touted prospect Don Money was handed the job in spring training and promptly flopped in the first week. This led to the call-up of minor-league journeyman Roberto Pena (#34), who became the regular shortstop for 1968. Gary Sutherland (#18) was on the team the entire year, but in more of a utility role.

3rd base
Partly due to his season-ending wrist injury in 1967, but also due to his defensive shortcomings, Richie Allen (#15) was moved to leftfield, with the versatile Tony Taylor (#8) became the regular third baseman. Utility 1B/3B Rick Joseph (#19) was also along for the ride.

Outfield
Johnny Callison (#6) was a fixture in rightfield, as usual. Rookie phenom Larry Hisle imitated Don Money and also flopped big-time in 1968. Tony Gonzalez (#25), Don Lock (#23), and John Briggs (#12) all rode the centerfield merry-go-round, with Briggs seeing some action at first base. Allen became the regular leftfielder, playing only a few games at his old third base spot. With all this job-sharing, there was only marginal playing time for Doug Clemens.

Pitchers
With Bunning gone, the undisputed ace was lefty Chris Short (#41). He bounced back from an injury-filled 1967 to win 19 games in 1968. Woody Fryman (#35) was the other left-handed starter, while the righties were Larry Jackson (#46) and Rick Wise (#38). Once again, the closers were right-handers Turk Farrell (#32) and Dick Hall (#27). Other assorted spot starters and long relievers were southpaw Grant Jackson (#29), and righties John Boozer (#31), Gary Wagner (returning to the team after 2 years in the minors), Jeff James, and Jerry Johnson (the latter two being rookies).

Others
At triple-A San Diego, the Phillies had a bunch of young pitchers, but most of the position players were major-league veterans: 1B Jim Gentile, plus a bunch of journeymen (catchers Doc Edwards and John Sullivan, 2B Bobby Klaus, 3B John Werhas, outfielders Billy Cowan and Johnny Lewis). The only prospects were SS Don Money and OF Larry Hisle.


Summary
The Phillies just fell apart in 1968. The controversy between manager Gene Mauch and Richie Allen went on all season until Mauch was fired. Allen wouldn't show up for games, preferring to spend time at race tracks instead. Bunning's wins were not made up, Allen didn't regain his batting stroke following the injury, and Gonzalez faded fast from his .339 average of the previous year, so much so that the Phillies left him unprotected in the upcoming expansion draft. Callison and White were also not the same players they once were. On top of that, the two rookies Money and Hisle flopped in the first month of the season. The team sank to a 76-86 record, 6 wins less than the previous year. Fortunately, you could always rely on the Astros and Mets to have worse records than any other team.

Following the season, the San Diego Padres (which was the Phillies' AAA team from '66-'68) and the Montreal Expos selected players in the expansion draft. The Phillies lost SS Roberto Pena and CF Tony Gonzalez to San Diego, and P Larry Jackson and SS Gary Sutherland to Montreal. Each team also picked a Phils' minor-league pitcher. When Jackson retired rather than report to an expansion team, the Phillies gave Montreal their remaining SS Bobby Wine as compensation (although by this time, Wine was essentially useless). Now all three shortstops with major league experience were gone. The pressure was really on rookie Don Money to come through in 1969!
Posted by Jim from Downingtown at 11:02 PM No comments: 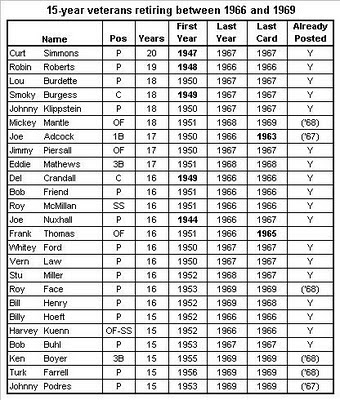 Yesterday and today, I've been watching the rebroadcasts of the 1969 World Series between the Mets and Orioles on the MLB network.

These games bring back a lot of memories, not only of the Amazin' Mets and the great Oriole teams of the late 60s and early 70s, but of baseball in general back then.

These games were originally broadcast by NBC, and the announcer was regular Mets' play-by-play man Lindsey Nelson, with Curt Gowdy doing color. WHAT A DIFFERENCE in the broadcasting style back then! Nelson is informative, without being overbearing or a Mets homer, and Gowdy rarely says anything - preferring to say nothing when there's nothing to say. With every pitch, there are gaps of silence where you can actually watch the game and take in the atmosphere.

If only today's "announcers" like Joe Buck and that clown Tim McCarver would take note! (I'm not even going to start in on the amateurish bunch employed by TBS!)
Posted by Jim from Downingtown at 12:48 PM 2 comments: