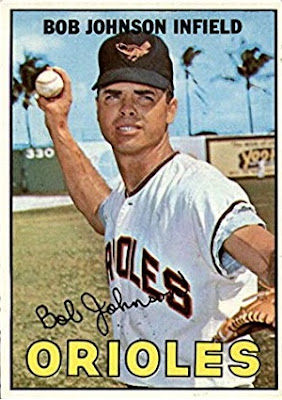 Johnson debuted with the Kansas City Athletics in 1960, then played the next 2 seasons with the expansion Washington Senators.  1962 was his only year in the regular lineup.

He moved up the road to Baltimore in 1963, and put in 4 seasons backing up Norm Siebern, Jerry Adair, Luis Aparicio, Brooks Robinson, and later, Dave Johnson and Boog Powell.  He didn't appear in the 1966 World Series, as the O's made quick work of the Dodgers in a 4-game sweep, without needing to go deep into their bench or bullpen.

Posted by Jim from Downingtown at 11:29 PM