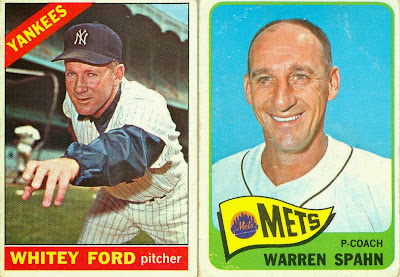 Congratulations to veteran starting pitchers Whitey Ford and Warren Spahn on their induction into the 1960s Blog Hall of Fame. They join the 23 others shown below.

After receiving 66% of the vote last time, Ford leapfrogged over Spahn and 3rd baseman Eddie Mathews, and became the first inductee to receive 100% of the vote.

Only 6 people voted this time (down from 18 last time) with all voting occurring in the first 2 days of the voting period. (Have all the good players already been elected?)

After 4 votes, Mathews and outfielder Roger Maris were still in the running, but first Maris, and then Mathews, dropped below the 75% mark, each missing induction by 1 vote. Twins' 2nd baseman Rod Carew finished strong to match their 67%. 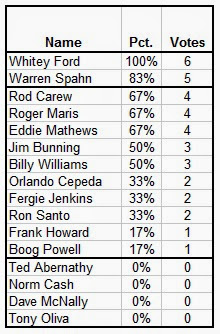 Four players received less that the minimum 15% to be retained for the next ballot.

Posted by Jim from Downingtown at 8:14 PM