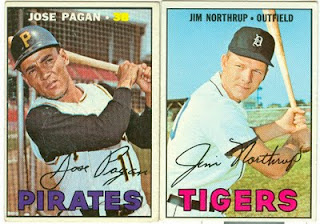 Jim Northrup was an outfielder for 11 seasons with the Tigers before finishing his career in 1975 with the Orioles. He hit a 2-run triple in game 7 of the 1968 World Series, allowing the Tigers to claim the championship.
.
Posted by Jim from Downingtown at 9:56 PM

Mayo Smith would have kept the #3 RBI man in the AL for 1968 on the bench to play the light hitting Mickey Stanley in centerfield?

Light-hitting? Ray Oyler was light-hitting. Stanley had as many hits as Northrup, along with a similar batting average.

RBI totals are mostly a result of who's on base ahead of you. Stanley bat in the 2nd slot most of the season, and led off the rest of the time. Northrup mainly hit 3rd, so naturally he had more opportunities for RBI.

We could probably agree that the aging Kaline should have been the odd man out, but that probably wouldn't have sit well with the Tiger fan base after all those years.