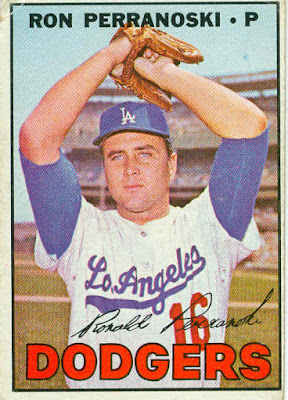 Perranoski played 7 seasons (1961-67) with the Dodgers, and was the team's top reliever in all but his rookie year.
He then played 4 seasons for the Twins, leading the AL in saves twice.
Ron moved on to the Tigers in late-1971, and a year later was back with the Dodgers for the final 2 months of 1972.  He wrapped up his playing career in 1973 with the Angels.
Perranoski worked for the Dodgers as a minor-league pitching coach (1973-80), and major-league pitching coach (1981-94). He had worked for the Giants since 1995.
New York Times obituary
Pittsburgh Post-Gazette obituary
Posted by Jim from Downingtown at 7:00 AM No comments: 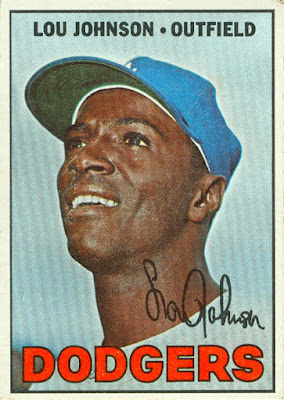 Johnson began his major-league career in 1960, playing a handful of games for the Cubs. After playing in one game in 1961 for the Angels, he was with the Milwaukee Braves for the 1962 season.
Following 2 full seasons in the minors, "Sweet Lou" played 3 solid seasons with the Dodgers from 1965-67, having been called up in mid-May '67 to replace Tommy Davis, who broke an ankle.
Johnson played for the Cubs, Indians, and Angels in his final 2 seasons (1968-69). 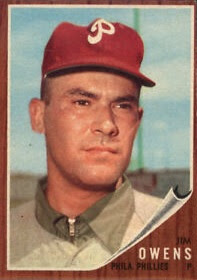 Owens pitched for the Phillies from 1955-1962, and was one of the infamous "Dalton Gang" members (with Turk Farrell and others).

He was traded to the Reds after the 1962 season for 2nd baseman Cookie Rojas. Working in the Phillies' starting rotation from 1959-1962, he was primarily a reliever after leaving Philadelphia.

Owens wrapped up his career with a stint in the Astros' bullpen from 1964-1967, reunited with his old pal Farrell.

He retired in early-July 1967, and became the Astros' pitching coach through the 1972 season.

Posted by Jim from Downingtown at 7:35 PM No comments: 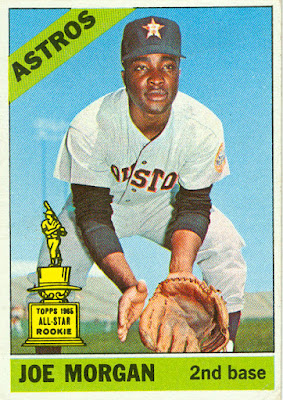 As everyone knows, he played the majority of his career with the Astros and Reds. What I had forgotten was that he returned to the Astros for one year (1980), when his team met the Phillies in the NLCS.

He later played for the Giants, Phillies, and Athletics. While with the Phillies in 1983, he was reunited with Pete Rose and Tony Perez.

I also didn't realize that in recent years he was working for the Reds. 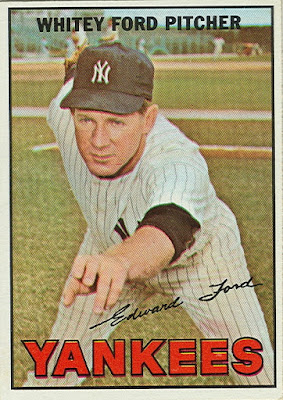 Ford played for the Yankees from 1950 to 1967. This is his final baseball card.
He retired on Memorial Day in 1967. Here is a newspaper photo I saved from the day he announced his retirement: 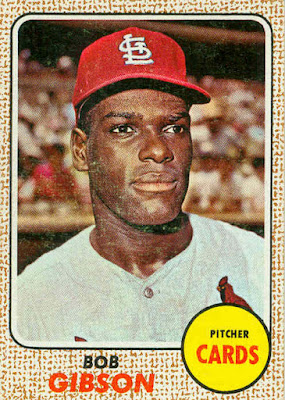 Rather than list all his accomplishments again, here is a link to a previous blog post where I listed those. He was also a pretty good hitter for a pitcher, hitting 24 career home runs.

In 1967, en route to the Cardinals' 2nd NL pennant in 4 seasons, Gibson's leg was broken by a line drive off the bat of Roberto Clemente. He stayed in the game for a few more batters until reluctantly coming out! He missed 7 weeks from mid-July to early-September, but the Cards clinched the pennant anyway in the first half of September. 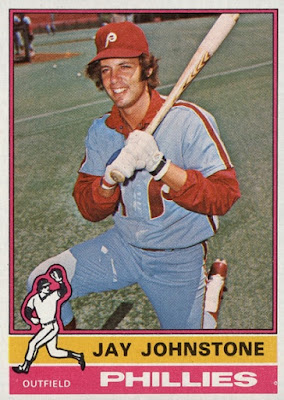 Johnstone began his career with the Angels in 1966. For the first 3 years he was up and down between the Angels and their AAA club, but in 1969 Jay was the Angels' everyday center fielder.

After the 1970 season he was traded to the White Sox, and played 2 seasons before he was released during spring training in 1973. The Athletics picked him up but he spent much of 1973 in the minors.

The Phillies acquired him in April 1974 and finally recalled him to the majors in early-July. During the 2nd half of the season he became the Phils' regular right fielder, a job he would hold until they traded for Bake McBride in June 1977.

During a game against the Pirates in 1975, Johnstone was playing right field. With Bucs' shortstop Frank Taveras taking a large lead off 1st base, Jay ran in and took a snap throw from catcher Johnny Oates to pick Taveras off FIRST BASE! The RIGHT FIELDER! 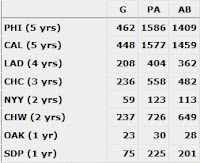 
Lou Brock, speedy outfielder for the Cardinals who led the NL in stolen bases 8 times, passed away on September 6, 2020 at age 81. 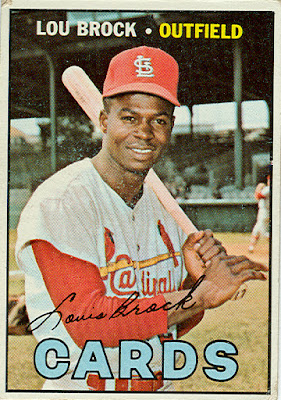 He was a 6-time All-Star. He was a starter in his first All-Star appearance (in 1967), ending Willie Mays' long streak of starting All-Star games.

Posted by Jim from Downingtown at 1:22 AM No comments: 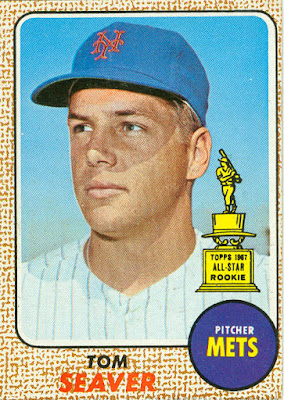 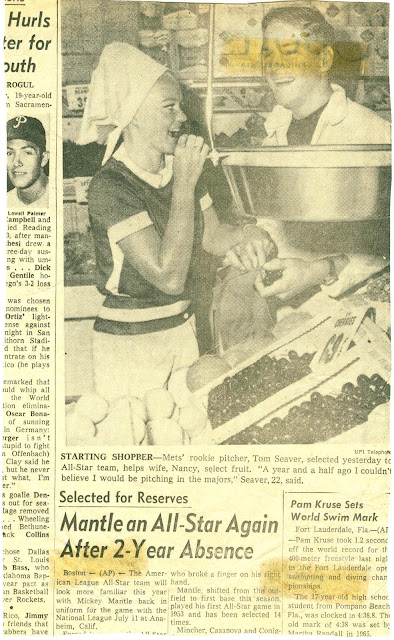 Posted by Jim from Downingtown at 9:02 PM No comments: 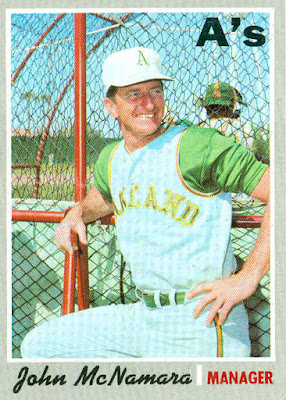 He was also an interim manager for the Angels for a short time in 1996. 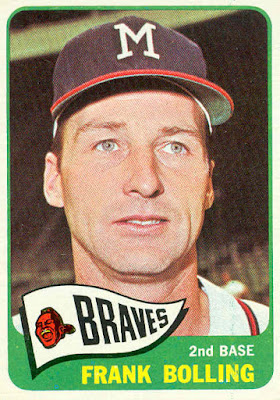 Bolling broke in with the Tigers in 1954, and was their starting 2nd baseman through the 1960 season.

After the season he was traded to the Braves for center fielder Bill Bruton (who had just led the NL in runs and triples), infielder Chuck Cottier, catcher Dick Brown, and pitching prospect Terry Fox.

Frank held down the 2nd base job for Milwaukee from 1961-65. In the final Braves' game in Milwaukee (Sept 1965) he hit a grand slam off of Sandy Koufax. It was the last slam surrendered by Koufax.

When the team moved to Atlanta in 1966, he shared the position with Woody Woodward, then was released after the season.

Posted by Jim from Downingtown at 12:23 AM No comments: 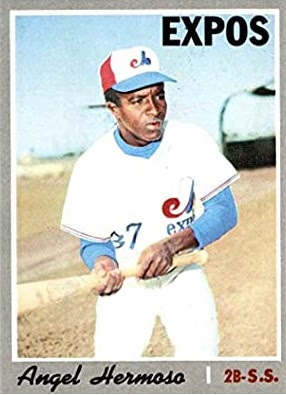 He debuted at age 19 with the Braves in September 1967. Hermoso also played for the Expos in 1969 and very briefly in 1970, before resurfacing in the majors one more time with the Indians in 1974.

In 2015 he was inducted into the Venezuelan Baseball Hall of Fame.
Posted by Jim from Downingtown at 12:23 AM No comments: 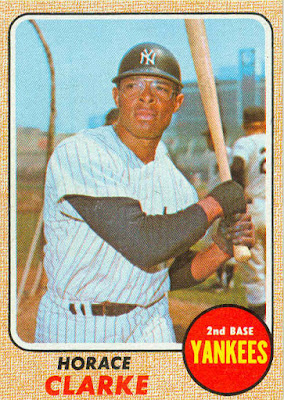 Clarke debuted with the Yankees in May 1965, and took over the 2nd base job with the retirement of Bobby Richardson after the 1966 season.

Clarke held that position through the end of the 1973 season, and along with Roy White and Mel Stottlemyre, bridged the gap between the great Yankee teams of the early-1960s and their mid-1970s' resurgence.

Horace lost the starting job at the start of the 1974 season to Gene Michael, who was eventually replaced by Sandy Alomar.

Posted by Jim from Downingtown at 1:16 PM No comments: