Aubrey Gatewood, a reliever for the Los Angeles Angels just before their move to Anaheim, passed away on June 5, 2019 at age 80.

Gatewood was originally signed by the Tigers, then was selected by the Angels in the post-1960 expansion draft.

He then spent the next 4 seasons in the minors, before resurfacing with the Braves for 3 games in mid-1970. 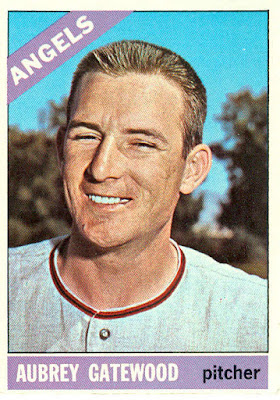 Obituary
.
Posted by Jim from Downingtown at 11:35 PM 1 comment:

Originally signed by the Angels, after a 1-game cup of coffee with the Giants in September 1967, Marshall made the team in 1968 and was named to the Topps All-Rookie team.

He played 2 full seasons with San Francisco, and 3 with the Mets before finishing up with the Padres in 1973. 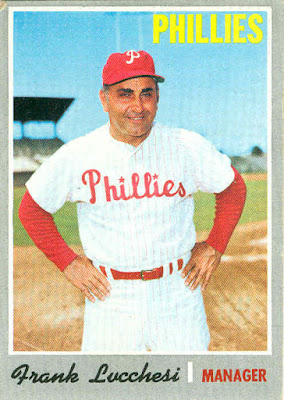 Lucchesi was an organizational foot soldier for the Phillies for almost 2 decades. He managed their minor league teams from 1956-69, progressing his way up the ladder to AAA, until accepting a demotion back to AA for 1967-68 so the Phillies could inexplicably give recently-retired Bob Skinner the triple-A reins for those 2 years, having no previous managing experience. (In 1969, Skinner proved he was useless as a major-league manager.)

Frank finally got his shot in the majors in 1970, as the Phillies revamped their team, coaching staff, and even their uniforms that year. Lucchesi was the Phillies' last manager at Connie Mack Stadium, and their first at Veterans Stadium.

After all that waiting, Frank finally had the job he wanted, but not the players, as the Phillies continued to flounder in the early 1970s. He was fired mid-season in 1972, and replaced by the GM (Paul Owens) who "wanted to see up close who could play and who couldn't".