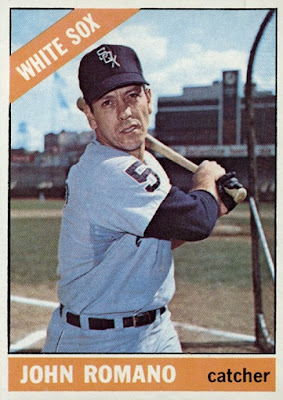 Romano was the White Sox' backup catcher in his rookie season (1959), then was traded to the Indians that winter in the deal that returned Minnie Minoso to the Sox.

Johnny was the Tribe's backstop for the next five seasons, and made all 4 All-Star teams picked during 1961-62.

He returned to the Pale Hose after the 1964 season in a 3-team mega-deal, and was their regular catcher for the next 2 seasons.

He played for the Cardinals briefly in his final season (1967).