Ed Barnowski, an Orioles' prospect who had a few cups of coffee in '65 and '66 but who could not crack the excellent Baltimore pitching staffs of that era, passed away on October 17, 2017 at age 74. 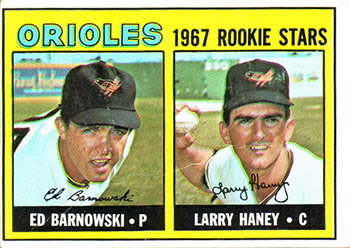 Barnowski pitched for Syracuse University, then was a starting pitcher in the Orioles' minor leagues every season from 1963 to 1969, but only saw big-league action in 6 games, all in relief (4 in Sept '65, 2 in Sept '66).

After his playing career, he was the general manager for the Orioles' AAA Rochester Red Wings for a few seasons. 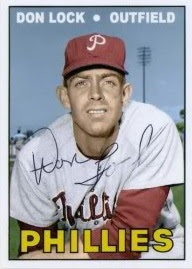 Lock debuted with the Senators in 1962 and was their regular center fielder from 1963-66. He led the Senators in home runs during '63 and '64, and was right behind the newly-acquired Frank Howard in the '65 and '66 seasons.

Traded to the Phillies after 1966, Lock spent 2 seasons platooning in Philly, then finished his career with the Red Sox in 1969. 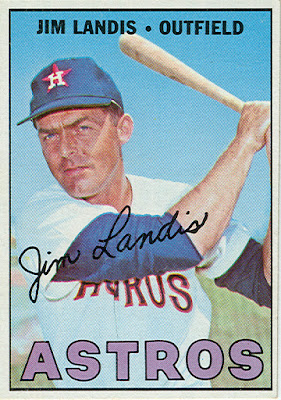 Jim played for the White Sox for 8 seasons, and was an All-Star in 1962. He won a Gold Glove award in each of his last 5 seasons in Chicago.

An 8-player, 3-team trade before the 1965 season sent him to the Athletics. After 1 season with Kansas City, he played for the Indians in 1966, then finished his career with 3 different teams in 1967.

Posted by Jim from Downingtown at 10:06 PM No comments: 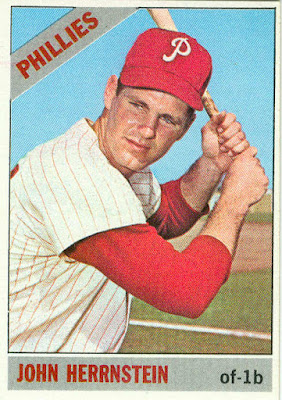 Herrnstein was the Phillies' starting first baseman for much of their ill-fated 1964 season, then was relegated to the bench for the final 2 months when veteran Frank Thomas was acquired from the Mets.

Herrnstein played sparingly in 1965, because the Phillies traded for another veteran first-sacker (Dick Stuart) in the off-season.

In early 1966, John was included in the trade that sent Ferguson Jenkins to the Cubs.   Herrnstein retired after the 1966 season.

Herrnstein has one of the longest Wikipedia pages I have seen for someone with such a short, unremarkable baseball career.

Herrnstein (and many others) screwed out of a MLB pension, thanks to the players' union greed

Posted by Jim from Downingtown at 11:22 PM No comments:

On November 28, 1967 the Dodgers gutted their bullpen and starting catching in an attempt to land a front-line shortstop. They failed miserably. 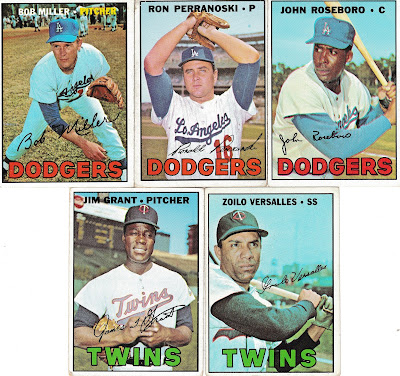 The Dodgers' top 2 relievers (Ron Perranoski and Bob Miller) along with John Roseboro (their starting catcher since 1958) were sent to the Twins in exchange for shortstop Zoilo Versalles and veteran pitcher Jim "Mudcat" Grant.

Ron Perranoski played for the Dodgers from 1961-67, and was the leader of the bullpen from 1962-65 and again in 1967. He led the NL in games during the '62 and '63 seasons. His 16-3 record in 1963 was the league's highest winning percentage. He never made an All-Star team, surprising given his stats and having played for the high-profile Dodgers. After the trade, Ron led the AL in saves during the '69 and '70 seasons with Minnesota. He was traded to the Tigers during the 1971 season.

Bob Miller played for the Dodgers from 1963-67.  Although a starter for much of 1963, he was strictly a reliever after that, taking his place right behind Perranoski on the bullpen ladder. Miller put in 2 solid seasons with the Twins (again behind Perranoski), then bounced around to 7 other teams during his final 5 seasons.

John Roseboro was a three-time All-Star with the Dodgers and had been the starter since taking over for the injured Roy Campanella at the start of the 1958 season. After the trade, John played 2 full seasons as the Twins' starting catcher (including making the All-Star team in 1969), then finished his career in 1970 as a backup for the Senators.


So who did the Dodgers get in exchange for those 3 guys who continued playing at a high level? LA was hoping to find a replacement for Maury Wills (who was traded away a year earlier) but got a whole lot of nothing.

Zoilo Versalles was the AL MVP in 1965, but had been declining since then. After batting .249 and .200 in his final 2 seasons with the Twins, he hit a whopping .196 in his only season with the Dodgers. Left unprotected in the expansion draft, he was selected by the Padres, but was quickly flipped to the Indians for 5-time Topps "Rookie Star" Bill Davis. Versalles was sold to the Senators in mid-year, then cut after the season. Verdict: Bust! 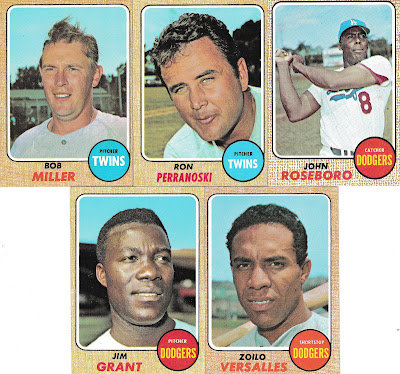 ADVANTAGE: Twins! The Dodgers got only 1 season each from Grant and Versalles (both sub-par), while Perranoski and Roseboro (and to a lesser extent Miller) put in multiple solid seasons for the Twins.
.
Posted by Jim from Downingtown at 2:05 PM No comments: