Oh, have I mentioned that the Orioles were my favorite American League team in the mid/late 1960s?

I recently posted Steve Barber's card on my 1966 blog, and it made me want to do this:

In 1966, they traded Milt Pappas to the Reds, and won the World Series without him.

To look at the 1967 card set, you would think this was the Orioles' rotation:

But due to a sore-arm epidemic, it turned out to be this:

By 1968, Dave McNally regained his earlier form (although Jim Palmer was still rehabbing):

Mike Cuellar joined the team in 1969, giving the O's their best rotation since 1966:

This is one of the four multi-player cards in the 1969 set.  Before the season, Palmer's comeback was still considered questionable, so he missed this photo op:

.
Posted by Jim from Downingtown at 7:36 PM No comments:


Just appearing on Baseball-Almanac.com in the past day or so is the fact that relief pitcher Dom Zanni passed away on July 6, 2017 at age 85. 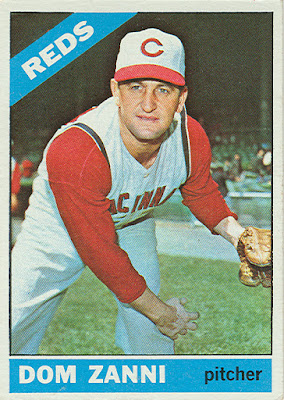 Zanni was born and raised in New York City, and was signed by his hometown Giants in 1951.

No obituary found, but there's this.
.
Posted by Jim from Downingtown at 12:52 AM No comments: 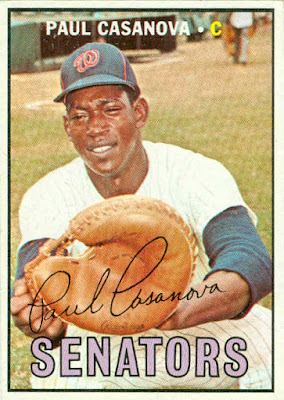 Casanova was the Senators' starting catcher from 1966-71. His best season was 1967, when he was an All-Star although did not play in the game. That season he also caught an ENTIRE 22-INNING GAME against the White Sox. Although he went 1 or 9 at the plate, he got the game-winning hit.


Phillies' catcher of the 1990s Darren Daulton passed away on August 6, 2017 after battling cancer for several years. He was 55. 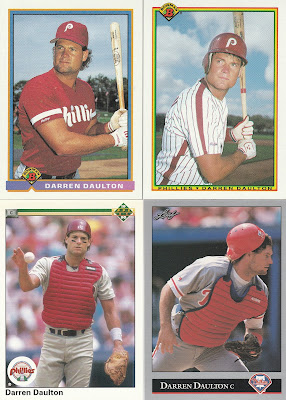 Daulton made his debut with the Phillies in September 1983, then after a year back in the minors he rejoined the Phils in 1985.

After missing most of the 1996 season, he returned to the Phillies in 1997 as an outfielder. Later that season he was traded to the Marlins, and helped them get to, and win the World Series. It was Daulton's only ring, and his final season.

Philly.com obituary
.
Posted by Jim from Downingtown at 12:55 AM No comments: 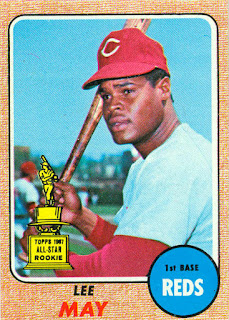 After getting his feet wet in '65 and '66, May began his fulltime major-league career with the Reds in 1967, soon taking over the starting 1st base job from veteran Deron Johnson, and was named to the Topps All-Rookie team that season. He also made the All-Star team in '69 and '71.

May missed out on the Big Red Machine era, as he was famously traded to the Astros after 1971 in a deal that saw the Reds acquire 2nd baseman Joe Morgan. Lee was the starting All-Star 1st baseman in 1972, his first of 3 seasons with the Astros.

Posted by Jim from Downingtown at 12:49 PM No comments: