In 1967, the Phillies had a few rising stars such as 3b Richie Allen, ... (ok, one rising star), along with aging but solid veterans like pitchers Jim Bunning, Chris Short, Turk Farrell, 1B Bill White, OF's Johnny Callison and Tony Gonzalez, and a few young players like P Rick Wise, 2B Cookie Rojas, and OF John Briggs. The team finished in 5th place, starting their downward slide which would turn into a freefall in 1968 and 1969. They were managed by Gene Mauch (#4), and had been since 1960.

Catcher
The Phillies starting catcher was left-hander Clay Dalrymple (#11), who had started for most of the 1960's. The two things I remember most about him were 1) he was bald, and as a kid I thought it strange that a ballplayer would be bald (I hadn't discovered Ray Nitschke for another year or two), and 2) he was always on the radio promoting the pre-season tours to Clearwater. Backing up Dalrymple was Bob Uecker (#9). Ueck was acquired from St. Louis prior to 1966 along with Bill White and Dick Groat for P Art Mahaffey, C Pat Corrales (later a Phillies' manager), and OF Alex Johnson. (The Phils could have used Johnson later - I think he won a batting title with Cincinnati or California in the early 70's .) Midway through the season, Uecker was traded to Atlanta for catcher Gene Oliver (#9). Like Uecker, Oliver was right-handed, but unlike Uecker, Oliver could actually hit! This got him more playing time at catcher, and pinch-hitting.

1st base
The Phillies first baseman for 1966-68 was Bill White (#10). This lefthander had come from St. Louis, and was the Phillies #3 slugger behind Allen and Callison. Unfortunately, he missed the start of the season due to an off-season paddleball injury. Tony Taylor (#8) played mostly at 1st base while White was out. The Phils signed 1B-OF Tito Francona as a backup until White returned, at which time Francona got the ax.

2nd base
Cookie Rojas (#16) had won the 2nd base job from Tony Taylor in '65 or '66. Rojas had joined the Phillies in 1963 from the Reds, and had worked his way up from utility IF-OF to starting 2nd baseman. With his one-game pitching stint in 1967, he had now played all nine positions. (Although the Athletics' Bert Campaneris and Twins’ Cesar Tovar had played all nine positions in a single game!) Tony Taylor had been the starting 2nd baseman since coming over from the Cubs in 1960, until Rojas replaced him. Still, Taylor found plenty of playing time at 1st (White's injury), at 3rd (Allen's late-season injury), as well as at 2nd and pinch-hitting.

Shortstop
The Phillies had holdovers Dick Groat (#24) and backup Bobby Wine (#7). Groat was the starter during 1966, while Wine had shared the job with Ruben Amaro Sr. for the first half of the decade. Also on hand was promising rookie Gary Sutherland. Groat landed on the disabled list with a foot injury in early April. After the Phillies sold outfielder Jackie Brandt in mid-June, Groat was activated into Brandt’s roster spot. This was short-lived, as Groat was washed up, and sold to the Giants in late June. Wine and Sutherland shared the job for most of the season, with Sutherland getting some time in left field as well.

3rd base
Richie "Crash" Allen (#15) was the star of this team. He was among the league leaders in HR and RBI, and had also homered in the 1967 all-star game. Allen's one problem was his defense. In late summer, while "pushing his stalled car", he jammed his hand through a headlight, cutting his wrist and ending his season. Taylor took over at third base the rest of the way, with 1B/3B Rick Joseph called up from San Diego as a backup.

Outfield
Right fielder Johnny Callison (#6) was the #2 slugger on this team. The left-hander was a star in the '64 and '65 all-star games. Long-time center fielder Tony Gonzalez (#25) moved over to left to start the season, making room for newly acquired center fielder Don Lock (#23). Lock had hit 99 homers in four years with the Senators. Left fielder John Briggs (#12) lost his starting spot temporarily, but soon got playing time as Lock faltered, and Gonzalez began shuffling between LF and CF. Gonzalez ended up batting .339, the second-highest average in the league. Also around for backup/pinch-hitting duty was former Orioles star Jackie Brandt (although only until mid-June), as well as Doug Clemens and Billy Cowan.

The bullpen was completely revamped for 1967. Gone from 1966 were Darold Knowles (traded for Lock), Ray Culp (traded for Ellsworth), Joe Verbanic (traded for Pedro Ramos), Ed Roebuck, Ray Herbert, Terry Fox, Roger Craig, Bo Belinsky, and John Morris. In their place were Turk Farrell (acquired from the Astros in late May) and Dick Hall (acquired from Baltimore in the off-season), both right-handed closers. I remember Hall's claim to fame was that he never walked anyone. (In his last 7 seasons, his unintentional walks were 4, 4, 4, 2, 3, 4, and 2!). It seemed like these 2 guys would always shut down the opposition! Setup guys included southpaw rookie Grant Jackson, and righthanders Bob Buhl, Pedro Ramos, and Ruben Gomez. The last 3 were all given pink slips before the end of May, and replaced by righties John Boozer and Dallas Green.

Others
Major-league veterans stashed at triple-A San Diego for emergencies were starting pitcher John Tsitouris (on loan from Cincinnati), relievers Terry Fox and Ed Roebuck, catchers Dick Bertell and Jimmie Schaffer, 1B Jim Gentile, 2B Bobby Klaus, SS Roberto Pena, 3B Rick Joseph, and outfielders Lou Clinton and Marty Keough. (Joseph was called up in August when Dick Allen was injured, and Schaffer played a few games in late September.)

Summary
On paper, the Phillies had some decent players that year. Injuries to White, Allen, and Short are what did them in, I guess. The following winter, Bunning was traded to the Pirates for LHP Woody Fryman, SS prospect Don Money, and 2 other minor-league pitchers. At the time, I COULDN'T BELIEVE THAT A TEAM WOULD TRADE THEIR ACE PITCHER!
Posted by Jim from Downingtown at 7:16 PM No comments: 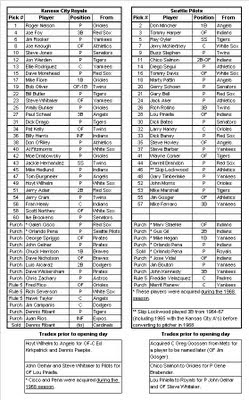 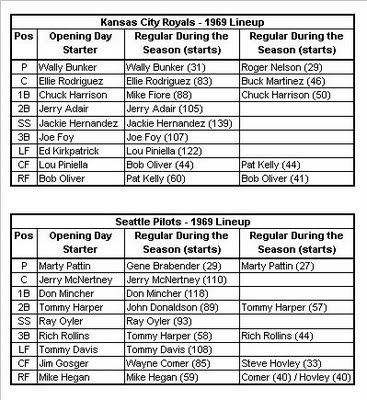 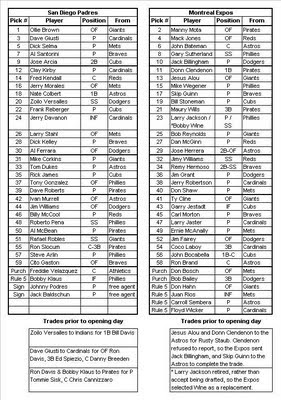 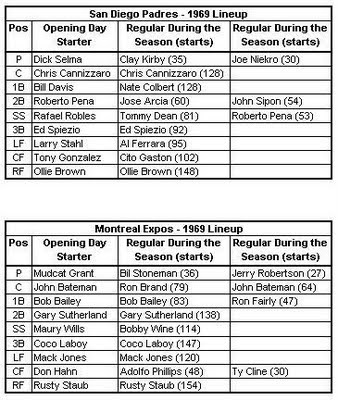 While poking around the internet, I found the following players to be the last active player from these teams:

(Jim Kaat outlasted Harmon Killebrew (who was my guess) by 8 years!)
.
Posted by Jim from Downingtown at 11:59 PM 4 comments: 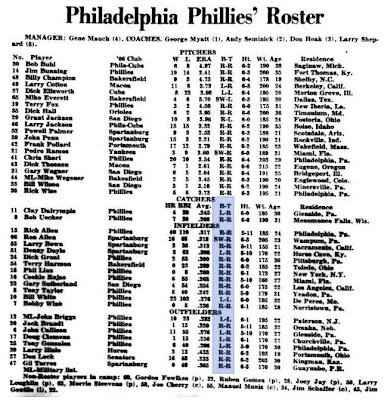 This is a 42-man roster. (John Briggs and Mike Wegener are designated as on the "Military List", so maybe they're not counted toward the 40-man roster.) The non-roster invitees are listed at the bottom, and include veterans Ruben Gomez, Joey Jay, Jim Schaffer, and Jim Gentile.

I found this article today on the New York Times archive website. Only the headline and first paragraph are available without paying. The headline is hilarious:

THE NEW YORK METS, who will get their first look at Willie Mays and the San Francisco Giants tonight, reported yesterday that they had purchased Jack Kralick from the Cleveland Indians.

.
Posted by Jim from Downingtown at 1:00 AM No comments: