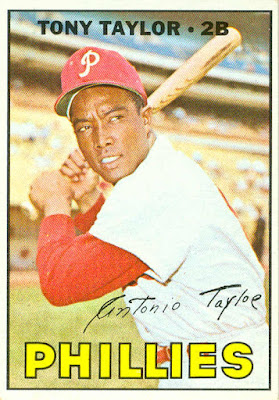 In 1967 he primarily played 3rd base and 1st base, filling in for the injured Dick Allen and Bill White. In 1968 he manned 3rd base as Allen moved to left field following his late-1967 hand injury.

By 1970 he was primarily a pinch-hitter, as the Phillies had various youngsters playing 2B and 3B. Upon his return from the Tigers in 1974 he became the team's go-to pinch-hitter.

Following his retirement after 1976, Taylor coached for the Phillies and Marlins.

While a Phillie, Taylor lived in the town next to mine. I can remember any time our family drove through his town, I made sure to look out the window, in case Tony should happen to be strolling down the street. (Never saw him though.)

NBC Sports obituary
.
Posted by Jim from Downingtown at 7:11 PM