The Mets won 383 games between 1966 and 1970. Five out of nine players are sporting Topps All-Rookie trophies!

The Mets finished in 10th or 9th place every one of their first seven seasons.  In season 8, they won 100 games, an improvement of  TWENTY-SEVEN wins over their 9th-place finish in 1968.

That kind of jump should have been an embarrassment to the Phillies, Indians, Senators, and even the White Sox (who were good from 1963-67, but went into the dumper from 1968-70). What did the Phillies do to improve?  They added the likes of Lowell Palmer, Billy Champion, Barry Lersch, Ken Reynolds, and Billy Wilson to their pitching staff.  Yay! 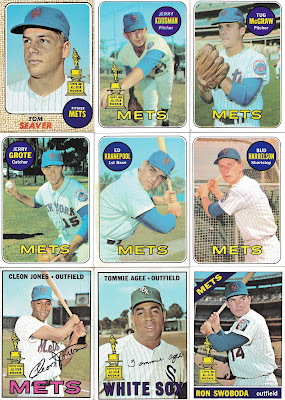