The 9th installment in the "Prime 9" series - spotlighting the 9 best players per team from the 1966-70 time period.

The Dodgers won a ninth-best 416 games between 1966 and 1970. This despite enduring the only stretch under manager Walter Alston where they finished lower than 2nd place for 3 consecutive seasons (1967-69).

(I should have included Sandy Koufax here, but he only played 1 season during this time period.) 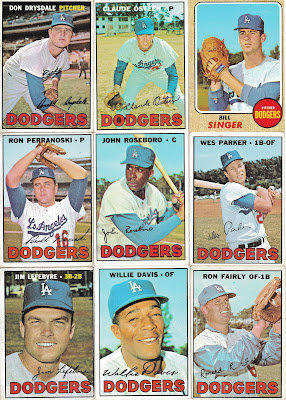 Great choices. When I first looked at this, I thought 4 pitchers? But, when I looked at the stats, I have to agree (not that you needed my agreement). Funny how Wills left and came back during this period.

Yes, this wasn't yet the era of Garvey/Lopes/Russell/Cey, so their infielders (Grabarkiewitz, Sudakis, Michael, etc) left something to be desired.

I was toying with adding more pitchers (Koufax, Sutton) but 4 was enough.