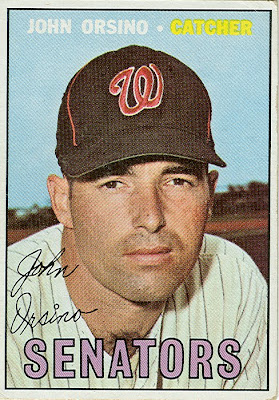 Orsino was signed by the New York Giants, and after playing parts of '61 and '62 with the Giants, he was traded to the Orioles (with pitchers Stu Miller and Mike McCormick) for pitchers Jack Fisher and Billy Hoeft, and catcher Jim Coker.

Orsino's best year was 1963, when he hit 19 home runs for the Orioles as their #1 catcher. He played 2 more seasons as the O's backup catcher.

His final big-league stop was the Washington Senators. He spent the next 3 seasons mostly on the DL or in the minors, with a few games with the Nats in '66.

He retired after playing 1969 with the Yankees' and Indians' AAA teams. After baseball he became a golf pro.

Posted by Jim from Downingtown at 8:59 PM