He was a standout college baseball and basketball player at the University of California - Berkeley in the 1950s.

Long before Frank Robinson (no relation) was patrolling right field for the Orioles, Earl was out there, sharing the starting job with the veteran Whitey Herzog as a rookie in 1961. Earl appeared briefly with the Dodgers in 1958, then played all of '61 and most of '62 with the Orioles. 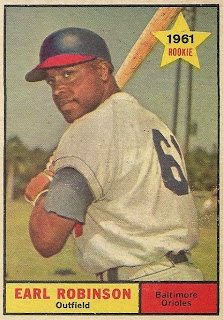 Robinson was back in the minors for all of 1963, then split the 1964 season between the Orioles and their triple-A team. He retired after playing the 1965 season with the Cubs' triple-A team.